[Drop-title]: For Private Distribution...Extracts from Letters addressed to Professor Henslow by C. Darwin 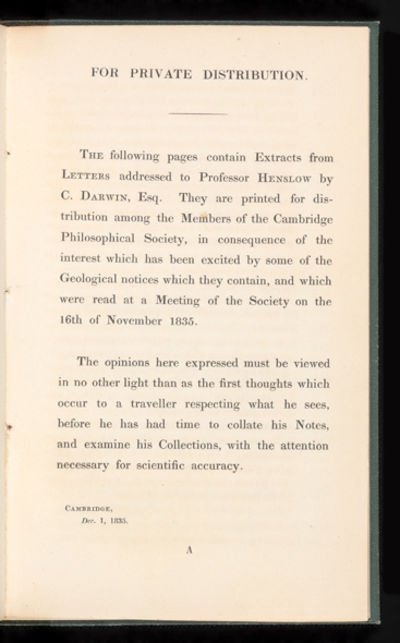 by DARWIN, Charles Robert
31 pp. 8vo, bound in attractive green morocco-backed cloth over boards. [Cambridge: "Printed for Distribution among the Members of the Cambridge Philosophical Society," 1 December 1835]. First edition of Darwin's first separately printed work, and of the greatest rarity. This unauthorized pamphlet contains extracts from ten letters written to John Stevens Henslow (1796-1861), by Darwin during his five-year voyage on the Beagle. Henslow had been Darwin's botany professor at Cambridge and their friendship "was one of the most influential circumstances in his [Darwin's] early life."-ODNB. It was Henslow who obtained for him the post of naturalist on the Beagle. Darwin's letters were published without his knowledge; Henslow had read some of them before the Cambridge Philosophical Society and was responsible for printing this small pamphlet of extracts. The present work did introduce Darwin's name and some important observations to a small but influential group of scientists, and when he arrived back in England in the autumn of 1836 he carried with him something of a reputation as a geologist. Fine copy, preserved in a green morocco-backed box. From the library of Robert Crewe-Milnes, 1st Marquess of Crewe (1858-1945), British statesman and author (note on pastedown stating that the book was purchased by Maggs Bros. from the Crewe library). Accompanied by the 1960 privately printed facsimile. ❧ Freeman 1. (Inventory #: 3678)
$300,000.00 add to cart or Buy Direct from
Jonathan A. Hill, Bookseller
Share this item
Jonathan A. Hill, Bookseller, Inc.
Offered by


(click for more details about [From lower inside wrapper]: Catalogue No. 5, Automne 1991)
View all from this seller>