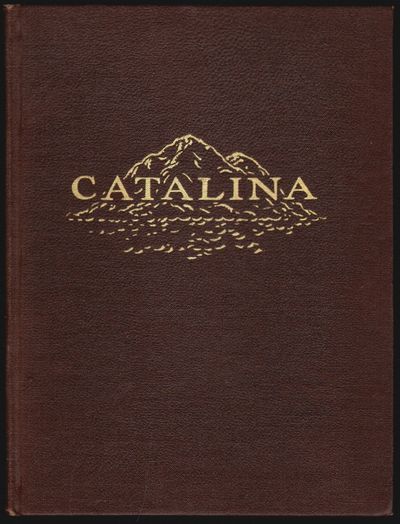 by Dashiell, Nellie E.; Lowenstein, Loretto (Illustrator)
Washington DC, 1924. Hardcover. Near fine. Unpaginated, approximately 80 pp, with frontispiece, 19 illustrations. Original brown cloth with vignette and title in gilt on front board. Very light shelf wear to boards; contents clean and sound. No dust jacket. The introduction to this scarce and rather odd work offers a brief history of Santa Catalina Island's history and attractions. This is followed by an epic poem which, as described by the author, "takes the reader back to the far-off prehistoric past when this sea-girt jewel was a newly-arisen uplift of the great Lemurian Continent, the Land of the Third Root Race of humanity." Historian Lawrence Culver, in The Frontier of Leisure, Southern Califoria and the Shaping of Modern America, describes this poem as the culmination of a number of works of the period that sought to promote Catalina Island by mythologizing its prehistoric past. Culver asserts that Dashiell "combined Greek and Arthurian legend, a version of the Atlantis myth, and Anglo-Saxon racial theories to produce an epic poem concerning two young lovers, residents of an ancient Catalina inhabited by whites under constant threat from dark-skinned mainland Indians." Meanwhile, the illustrations seem to suggest that the island was inhabited by elves and fairies. (Inventory #: 2194)
$150.00 add to cart or Buy Direct from Walkabout Books
Share this item

Saga of the San Bernardinos

Chicago : Mrs. T.M. Starr , 1896
(click for more details about The Acme Guide to Coloring Photographic Portraits of all Draperies, Backgrounds, &c. in Transparent Water Colors)
View all from this seller>