A MONOGRAPH OF THE ODONTOPHORINÃ, OR PARTRIDGES OF AMERICA 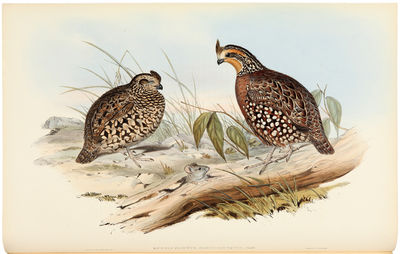 Besides the spectacular plates of American birds, this work is interesting for the light it throws on the all encompassing nature of science before specialization: Gould was inspired by the gift of a British Arctic explorer, received much useful information from a Scottish botanist, and finally dedicated the work to French ornithologist Prince Charles Lucien Bonaparte (1803-57), the author of AMERICAN ORNITHOLOGY.

Gould was persuaded to undertake this project "by the sight of the beautiful Callipepla Californica, presented to the Zoological Society of London by Captain Beechey, in 1830. The graceful actions and elegant deportment of these birds inspired me with a desire to become thoroughly acquainted with the entire group of which they form a part; this desire was even strengthened by the details furnished to me by the late celebrated traveller and botanist, Mr. David Douglas, respecting species seen by him in California, of the existence of which we had until then no idea....In the course of my researches I have several times visited most of the public and many of the private collections of Europe, and have besides corresponded with various persons in America: the result is that I have had the pleasure of extending our knowledge of the group from eleven to no less than thirty-five species" - Preface. ANKER 176. FINE BIRD BOOKS (1990), p.102. NISSEN, IVB 376. SAUER 13. WOOD, p.365. ZIMMER, p.257. (Inventory #: WRCAM47926A)
$20,000.00 add to cart or Buy Direct from
William Reese Co. - Americana
Share this item