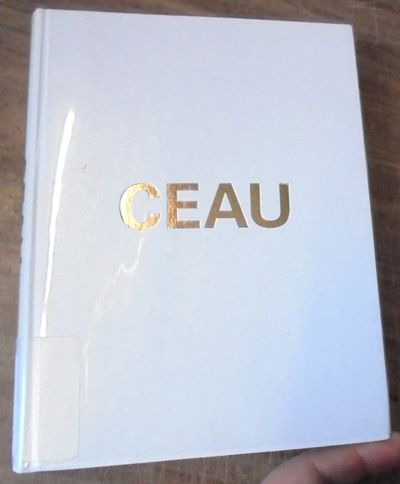 by Buchel, Christoph and Giovanni Carmine (Editors)
Gottingen: Steidl, 2008. Hardcover. Pristine but for art school ex-lib. marks, including red stamps on page edgings. Sticker is on acetate cover, not book spine.. White flexible leather boards with gilt lettering. Clear acetate dust wrapper. Color-pictorial end papers. 350 pp. with color images throughout and 28 pp. text, including the 20-page trial transcript. In 1936, the youthful Nicolae Ceausescu was imprisoned for anti-Fascist agitation in Bucharest. Some 53 years later, he was tried and convicted as a dictator, for genocide and the sabotage of the Romanian economy. In that interval, Ceausescu had gone from street agitator to Communist minister, president of the State Council, President, and, ultimately author of a personality cult that was to estrange him from the most basic needs of his people--leading to his execution by firing squad in 1989. The Ceausescu following stemmed in part from a particularly powerful personal narcissism that required a great deal of iconic affirmation of itself, and CEAU gathers a selection of the hundreds upon hundreds of portraits of Nicolae and Elena Ceausescu that had either been commissioned by a variety of political bodies within the Socialist Republic of Romania or had been offered to the Ministry of Culture as a gift by the artists themselves. These portraits have been preserved in the storage vaults of the National Museum of Contemporary Art in Bucharest and are now collected and published for the first time, with a transcription of the 1989 trial of Nicolae and Elena Ceausescu that brought an end to their rule. (Inventory #: 157733)
$75.00 add to cart or Buy Direct from Mullen Books
Share this item