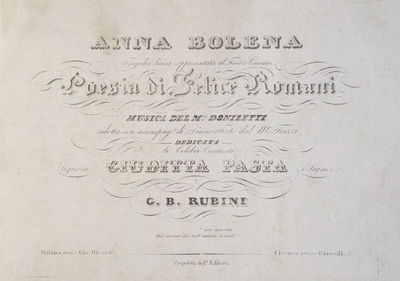 A tragedia lirica in two acts to a libretto by Felice Romani after Ippolito Pindemonte's Enrico VIII ossia Anna Bolena and Alessandro Pepoli's Anna Bolena, the opera was first performed in Milan at the Teatro Carcano on December 26, 1830.

"This was Donizetti's first great international success, giving him his initial exposure to Paris and London audiences. Pasta (Anne) and Rubini (Percy) sang in the première. Immensely popular for almost half a century, it re-entered the modern repertory following a triumphant revival at La Scala with Callas in 1957. Since then the work has proved a favourite vehicle for such bel canto specialists as Sutherland, Sills and Caballé... [The] final 20 minutes of Anna Bolena reveals for the first time Donizetti's mature ability to flesh out an ariafinale so that it provides the substance of a gripping scene... Nothing Donizetti had done before approaches the scope and multiform intensity of this magnificent scene." William Ashbrook in Grove Music Online. (Inventory #: 28087)
$1,980.00 add to cart or Buy Direct from
J. & J. Lubrano Music Antiquarians
Share this item