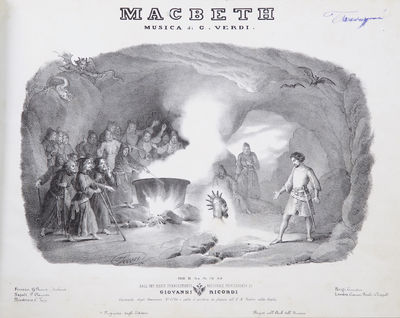 With vocal parts added in early manuscript to blank treble and bass clef of keyboard for unaccompanied quartet "O gran Dio" and pp. 84-90.

An opera in four acts to a libretto by Francesco Maria Piave (with additional material by Andrea Maffei) after Shakespeare's play, Verdi's Macbeth was first performed in Florence at the Teatro della Pergola on March 14, 1847 and in a revised version, with libretto translated by Charles-Louis-Etienne Nuitter and Alexandre Beaumont in Paris at the Théâtre Lyrique on April 21, 1865.

"Macbeth is often considered a watershed in Verdi's early career, much being made of the fact that it is based on Shakespeare, an author for whom Verdi frequently voiced great admiration. There is a new level of attention to detail in orchestration and harmony, and another melding of the public and personal manner. But what also singles the opera out is an element that recent commentators have found troublesome: its exploitation in the witches' music of the 'genere fantastico' (the fantastic or supernatural genre). There are early attempts in this vein in Giovanna d'Arco, but in Macbeth this alternative 'colour' is vividly explored, and placed in juxtaposition to the dark, personal world of Macbeth and his wife, thus expanding the range of the opera by centring it around a violent conflict between two musically distinct worlds." Roger Parker in Grove Music Online. (Inventory #: 28086)
$3,000.00 add to cart or Buy Direct from
J. & J. Lubrano Music Antiquarians
Share this item