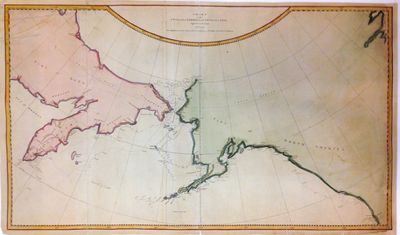 by COOK, James
London: James Cook, 1784. unbound. Map. Engraving with modern hand coloring. Image measures 16" x 27.25". This important and scarce 1784 map of the North Pacific covers the northwest coast of America including Alaska east as far as the Hudson Bay and the northeast coast of Asia including Kamchatka. The map is from the first edition of the official account of Captain James Cook's Third Voyage in the HMS Revolution between 1778 and 1779. The route of his journey is depicted in detail with depth soundings noted along the route. Several Capes, islands and bays are labeled. This map is among the first to accurately map the coastlines of the region. It was during this voyage, that Cook encountered an 'impenetrable wall of ice' in the Arctic as he searched for the Northwest Passage, thus putting to rest the hopes for the discovery of an Arctic Northwest Passage. Map was engraved by T. Harmer for the official account of Cook's voyages. The map is in fair condition. Right margin is extended and filled in. Minor loss near bottom margin, not affecting printed area. Shows wear along original fold lines. Minor foxing. Verso repair near top left. Lined with archival paper. Captain Cook (1728 -1779) was among the most famous and important explorer, navigator, cartographer and captain of his time, whose scientific and geographical knowledge influenced his successors well into the 20th century. He started sailing as a teenager and went on to join the Royal Navy in 1755. In 1766, he was commissioned to explore the Pacific and went on the sail thousands of miles across largely uncharted regions of the world. These three historic voyages led him to some of the first sightings of Antarctica, his discovery of many Polynesian islands, including the Hawaiian Islands, first European contact with east Australia, the circumnavigation of New Zealand and the first correct mapping of the Pacific Northwest. (Inventory #: 271442)
$875.00 add to cart or Buy Direct from
Argosy Book Store
Share this item