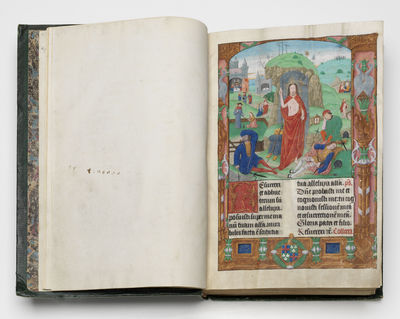 by Catholic Church
A LUXURIOUS DISPLAY MANUSCRIPT OF THE MOST IMPORTANT OF ALL TEXTS IN CHRISTIAN LITURGY, THIS IS THE LONG-LOST MISSAL OF GERAARDSBERGEN ABBEY, NOW WITH TWO OF ITS MISSING MINIATURES FOUND AND RESTORED. Illuminated manuscript in Latin on parchment, Belgium, Geraardsbergen or Grammont, c. 1510-1520, after 1506. 335 x 230 mm. 189 folios, lacking single leaf after f. 39 and probably at end, ruled in ink, written in Gothic liturgical hand in two columns of 23 lines (justification 238 x 156 mm.), music on black 4-line stave, rubrics in red, capitals touched in red, 1-line initials in red and blue, 2- to 4-line initials in red or blue with contrasting pen decoration in violet or red, 4-line initials of both colors, FOUR ILLUMINATED INITIALS AND FOUR HISTORIATED INITIALS WITH THREE-SIDED BORDERS in the Ghent-Bruges tromp l'oeil illusionistic style, FOUR LARGE MINIATURES (half to three-quarter page) with FULL BORDERS, mostly of a similar type, but one with narrative scenes, ONE FULL-PAGE MINIATURE. BINDING: Early nineteenth-century French or Belgian green morocco, gilt frame on boards, spine with six raised bands and gilt lettering in second compartment: "Manuscrit du 15e siècle," marbled pastedowns, red speckled edges. ILLUSTRATION: When the greatest Renaissance abbot of the Geraardsbergen, or Grammont, Abbey, Jan de Broedere (abbot 1506-1526) commissioned a luxurious two-volume Missal, probably for the Lady Chapel in the Abbey's church, he engaged local artists to decorate it. This group of Bruges illuminators is known as the Masters of Raphael de Mercatellis for their contributions to the library of renowned bibliophile Raphael de Mercatellis (1437-1508), bastard son of Duke Philip of Burgundy and abbot of Saint-Bavo in Ghent. These artists had a keen eye for details and are known for the outstanding iconographical interest of their miniatures. The five large miniatures here depict the Resurrection and a sequence of subsequent events including the Harrowing of Hell, the Noli me tangere, the supper at Emmaus, and the Ascension (f. 1), the Ascension (f. 29), the Trinity (restored between ff. 53 and 54), the Veneration of the Host (f. 56), and the Crucifixion (restored between ff. 93 and 94). TEXT: This is the summer volume of a Missal, from Easter Sunday to the weeks following Pentecost. The companion winter volume is Glasgow, University Library, MS Euing 29. PROVENANCE: Written and illuminated for Jan de Broedere (d. 1526), with his arms painted on ff. 1 and 89, this Missal was probably intended for the use of the church of the Benedictine Abbey of Geraardsbergen, or Grammont, in eastern Flanders, near Brussels. Separated from its companion volume in the first half of the nineteenth century. Belonged to Beriah Botfield (1807-1863), who purchased the book from Thomas Thorpe in 1830, at which time this volume was already missing miniatures. Botfield bequeathed his collection to the library of the Marquesses of Bath and Longleat, and it was transferred to the ownership of Lord Alexander Thynne, son of the fourth Marquess, in 1911. Passed by descent to the seventh Marquess of Bath, Longleat House; their sale, Christie's, 13 June 2002 (lot 3). Two miniatures found and restored by Les Enluminures. CONDITION: A few tiny pigment losses in borders, but generally in excellent and fresh condition. Some scratches and tears to leather of binding (scuffed), but binding in general sound condition. Full description and photographs available. (Inventory #: 5892)
$575,000.00 add to cart Available from
Les Enluminures, Ltd.
Share this item
Les Enluminures, Ltd.
Offered by

Germany (Freiburg im Breisgau?), dated 1494
(click for more details about Breviary (Dominican Use); in Latin, illuminated manuscript on parchment)
View all from this seller>