CHARLES FROHMAN Presents MAUDE ADAMS In a play, In Six Acts, PETER PAN Or, THE BOY WHO WOULDNT GROW UP. 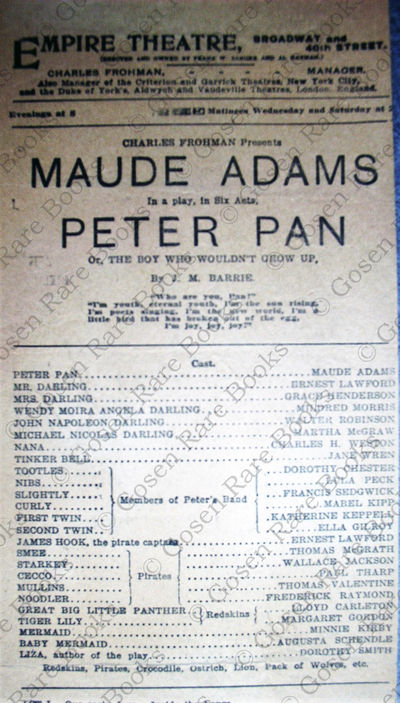 by Barrie, J.M.
New York: Empire Theatre, January 1907. Playbill. Fine. CHARLES FROHMAN Presents MAUDE ADAMS In a play, In Six Acts, PETER PAN Or, THE BOY WHO WOULDNT GROW UP. Empire Theatre, New York: [1907, probably after Jan. 21]. 45 cm x 12.5 cm Theatrical playbill-broadside for the complete six-act production of Peter Pan at the Empire Theatre in New York for J. M. Barries play, which had opened at the Empire Theatre in New York November 6, 1905. This production included the mermaids lagoon scenes (Act III), which were left out of the earlier performances. The legendary Maude Adams still played Peter Pan, having joined Charles Frohmans company in 1892. She opened in Peter Pan in New York on November 6, 1905 and appeared in more than 500 performances of the play. The world premiere of Peter Pan took place at the Duke of Yorks Theatre in London, December 27, 1904. In 1905 and 1906 the curtain time was 8:20, on this broadside, it is 8. There were also changes from the earlier cast. Charles Frohman was the manager of the Empire, Criterion, and Garrick Theatres in New York and also the manager of the Duke of Yorks Theatre and the Aldwych Theatre in London. Unmounted. With a plan of the theatre below, showing the gallery exit plan. The paper has been cleaned to remove superficial and ground-in dirt, then washed to reduce acidity and discoloration. The sheet has been sized with gelatinand lined with mulberry paper. Fine condition. (Inventory #: 3)
$1,500.00 add to cart Available from
Gosen Rare Books
Share this item

London : Published by Sherwood, Jones and Co. Paternoster-Row , 1823
(click for more details about POINTS OF MISERY; or FABLES FOR MANKIND: Prose and Verse, Chiefly Original, by Charles Westmacott. Illustrated with Twenty Designs by Robert Cruikshank. )

Smith, Elder and Co., Cornhill. , 1832
(click for more details about The Comic Offering; or Ladies’ Melange of Literary Mirth, for MDCCCXXXII. Edited by Louisa Henrietta Sheridan.)
View all from this seller>