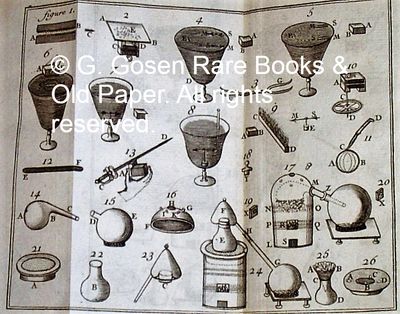 by Polinière, Pierre,
Good. A Paris, Chez : Jean de Laulne, dans la Place de Sorbonne, à lImage S. Jean. Claude Jombert, près des Augustins, à lImage Notre-Dame. Jacque Quillau, Imprimeur, rue Galande, aux Armes de lUniversité. 1709. Avec Approbation et Privilege. First edition. 17 cm. In-12 (8 +4); [iv ; 508 pages ; 10 plates]. Pasted onto the paste-down of the back cover is an additional engraving : dated or 1799. The instruction to the binder for the placement of the plates at the end of the text is on the verso of the last page of text. There is an advertisement for Polinières Les Elemens des Mathematiques (1704) on the verso of the title page. There is an eighteenth century signature on the title page: Courtin, Pretre, possibly that of Vincent-Joseph Courtin, prêtre du Diocèse de Cambrai, ca. 1773, and also a pencil annotation, "Paris, 1923." This copy is bound in mottled calf with a gilt-decorated spine and a recent red leather label. The front cover has been reattached. Despite the sloppy repairs to the spine, front cover and to the left edge of the title page, this copy is still a good working copy, now housed in a hard folding box by Deborah Evetts. Polinière devotes the first half of his book to experiments on the equilibrium of liquids and on the weight and elasticity of air. Next, he explores the directionality of magnetism and an experiment with magnetism for communication. At p. 303, the section on chemistry begins with a preface, followed by a systematic introduction, starting with acids and alkalines. Polinière follows chemistry with a section on anatomy, based on dissection, including circulation of the blood. The book concludes with a section on colors and light. An alphabetical index of the experiments concludes the text. In Mémoires de l'Académie des sciences, inscriptions et belles-lettres de Toulouse, 1902 : II, 1709, we learn Polinière was born in Coulence, Normandie (1671-1734) and that in 1722 he was asked to devise a curriculum for the young Louis XV, then 13 years old. There is a book plate of William Otho Potwin Morgan (1895 1934) and Christiana Drummond Councilman with the motto Morgan Pelagius on the pastedown of the front cover. Born in Chicago to a family of varnish manufacturers, William Otho Potwin Morgan was educated at St. Pauls School in New Hampshire, then entered Harvard in 1914, where he met Christina Drummond Councilman, the daughter of the Shattuck Professor of Pathological Anatomy at the Harvard Medical School. In 1917, he joined the United States Army and was shipped out to France (AEF 1st Div, 28th Infantry) in what became known as the Black Snake Division. Wounded and shell-shocked William Morgan returned to work at the Guaranty Bank in New York and with his wifes help and at her insistence, he began to write as a journalist, with an important article appearing in The New Republic about his experiences in the war and after with the Peace Commission, advocating for the implementation of President Wilsons Fourteen Points. James Carl Nelson wrote about Morgan in his Five Lieutenants the Heart Breaking Story of Five Harvard Men Who Led America to Victory in World War I. Christina Councilman escaped from her parents and went to New York, where she underwent a rigorous training to be a nurse, then working at Flower Hospital on East 68th Street in Manhattan, first in general patient care, then as a surgical nurse, with a view to joining her fiancé in France. Instead, she stayed in the United States and nursed victims of the flu, establishing herself as an independent woman. In 1921, she began taking classes at The Art Students League, as her marriage began to disintegrate, studying with Frank DuMond. She also met and had an affair with Chaim Weitzmann. Later through friends of her husbands she met Carl Jung and was called by him an anima woman or, an erotic muse. See: Translate this Darkness. The Life of Christiana Morgan, the Veiled Woman in Jungs Circle by Claire Douglas, Princeton University Press: 1993. (Inventory #: 48)
$2,500.00 add to cart Available from
Gosen Rare Books
Share this item