The Herball or Generall Historie of Plantes...Very much Enlarged and Amended by Thomas Johnson 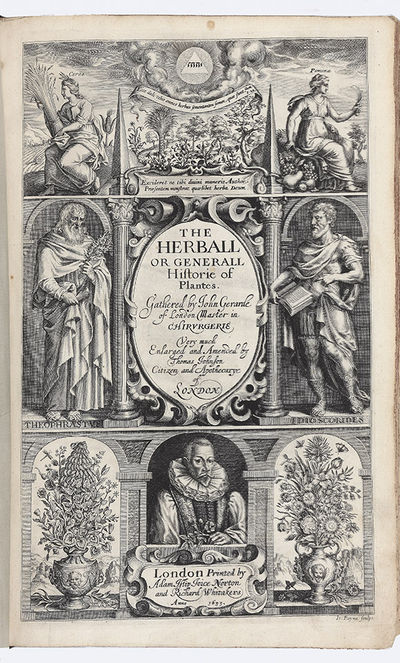 by GERARD (or GERARDE), John
Finely engraved title, woodcut head- & tailpieces, & 2776 woodcuts in the text. 20 p.l. (incl. initial blank & engraved title), 1630, [48] pp., one blank leaf. Thick folio (350 x 210 mm.), cont. calf (well-rebacked by Trevor Lloyd with the original spine laid-down, a few gouges carefully filled-in, corners bruised), panelled in gilt & blind, large gilt device in center of each cover, with initials "W H" on either side. London: A. Islip for J. Norton & R. Whitakers, 1633. First edition of Thomas Johnson's expanded and corrected version of Gerarde's Herball (1st ed.: 1597), the most famous of all English herbals. "Many errors made by Gerard in his text and in the identification of the illustrations were corrected by the apothecary and botanist Thomas Johnson (d. 1644), of London, who prepared an expanded edition of The Herball that first appeared in 1633...Johnson's painstaking revision of Gerard's herbal constituted in itself a valuable contribution to botany and to the art of the printed book. He added the descriptions of many new plants with illustrations, some of them borrowed from the botanical texts published by Christophe Plantin in Antwerp, in this way bringing the total number of engravings to 2,776. Any new passages were carefully marked with special symbols so that the reader could distinguish them from the original text... "The title-page of The Herball is particularly attractive. It was executed by John Payne (1607-1647), one of the most talented engravers of the period...In the upper part of Payne's work we see a luxuriant garden with the goddesses Ceres and Pomona on either side. Below them are the fathers of botany, Theophrastus and Dioscorides, while in the lower section two imposing vases filled with flowers surround a portrait of Gerard, who is shown facing in the opposite direction to that of the portrait by Rogers. The vase on the left is crowned with a bunch of bananas as a tribute to Johnson... "One of the most significant additions made by Johnson was his chapter on the 'Maracot' or 'Grandilla' as it was called at the time (actually the passion-flower). He includes a full page illustration (p. 1592) and refers the reader to Monardes for more information on this exotic species...In the long preface Johnson traces the history of the botanical sciences, analyzing the contributions of celebrated figures from the mythical King Solomon to William Turner...He closes with some critical remarks on John Gerard and the origins of his herbal."-Tomasi & Willis, An Oak Spring Herbaria, p. 84. An uncommonly nice and crisp copy. Bookplates of John Charles Bigham, Viscount Mersey, Bignor Park and Oliver Howard. ❧ Garrison-Morton 1820-(1st ed. of 1597)-"The most important edition of his book is the second, published by T. Johnson in 1633." Henrey, I, pp. 48-54-"Johnson produced an edition that was noteworthy for its many corrections, improvements, and additions" & no. 155. Hunt 223. (Inventory #: 5564)
$17500.00 add to cart or Buy Direct from
Jonathan A. Hill, Bookseller
Share this item
Jonathan A. Hill, Bookseller, Inc.
Offered by

by (SPOLIATION OF ITALY)