Narrative of a Journey to the Shores of the Polar Sea, in the Years 1819, 20, 21, and 22. With an Appendix on Various Subjects Relating to Science and Natural History 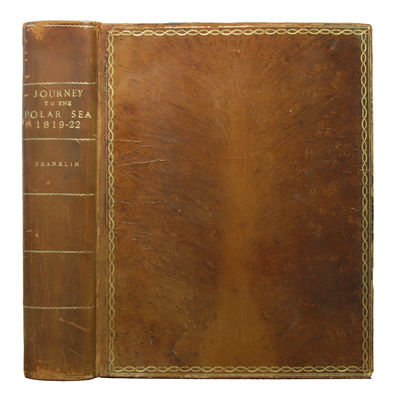 xvi+768+[6 index] pages with 31 plates of which 11 are in color (9 in aquatint) and with four plates of plants (1 in color) preceding four large folding maps all dated March 1823, with an appendix which Sabin calls "valuable" in its contribution to the knowledge of the natural history of the area and errata slip tipped in. Quarto (10 3/4" x 8 1/2") bound in original contemporary tree calf with spine in gilt lettering. The plates were engraved by Finden, from drawings by Lieutenants Hood and Back. (Hill 635. Abbey Travel 635; Arctic Bibliography 5194; Books on Ice 3.1; Lande 1181) First edition first issue with the errata slip mounted to page 768.

This expedition also known as the Coppermine Expedition of 1819–1822 had as its goal the exploration of the northern coast of Canada, which was accessed by way of the Coppermine River. The British expedition was organized by the Royal Navy as part of its attempt to discover and map the Northwest Passage. It was the first of three Arctic expeditions to be led by John Franklin, and also included George Back and John Richardson, both of whom would become significant Arctic explorers in their own right. The expedition was plagued by poor planning, bad luck and unreliable allies. The expected assistance from the local fur trading companies and native peoples was less forthcoming than expected, and the dysfunctional supply line, coupled with unusually harsh weather and the resulting absence of game, meant that the explorers were never far from starvation. Eventually the Arctic coast was reached, but barely 500 miles had been explored before the exhaustion of the party's supplies and the onset of winter forced them to turn back. The expedition made a desperate retreat across uncharted territory in a state of starvation, often with nothing more than lichen to eat. Eleven of the twenty strong party died amid accusations of murder and cannibalism before the survivors were rescued by native people of the Yellowknife tribe. In the aftermath of the expedition, John Franklin was much criticized by local fur traders for his haphazard planning and failure to adapt to the circumstances he faced, but in Britain he was received as a hero, fêted for the courage he had shown in extreme adversity. The expedition captured the public imagination, and in reference to a desperate measure he took while starving, he became known as "the man who ate his boots".