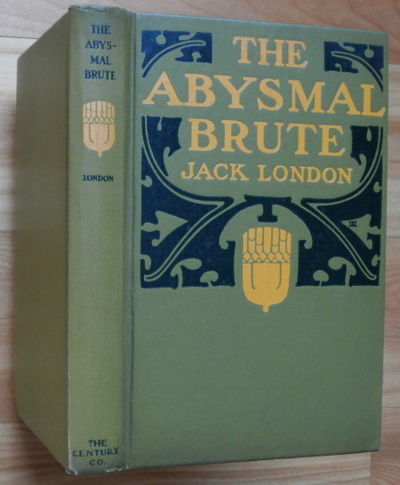 by London, Jack
1913. New York: The Century Company, 1913. 2 pp undated ads. Original olive green cloth decorated in yellow-orange and dark green. First Edition, first binding state (stamped in yellow-orange). This is London's prizefighting tale about "a white backwoods giant who would rather read Browning than slug his opponents," believed to have been prompted by his coverage of the Johnson-Jeffries fight in Reno. A new shock of disillusionment came when Charmian gave birth to a daughter, Joy, who died within a few days. It was more than Jack could bear. He went out drinking and collected a black eye in a fracas with an Irish saloon-keeper. Both men spent the night in jail and accused each other of assault, but the judge dismissed the case. Notorious again for brawling on the day of his baby's death, he left for Reno to report the prizefight between Johnson and Jeffries for the New York Herald. Among male company in the training camps, he forgot his despair about his child... Nevertheless, a new self-awareness and compassion showed even in his descriptions of boxing. Some years before, his novel THE GAME and his account of the fight between Britt and Nelson had been brutal and supremacist. But his reporting of Johnson's victory against... [Jeffries was] infused with reluctant admiration for the black champion's grace and repartee, as well as with pity for his white victim. Jack's respect for Johnson's mastery and ease showed in his mocking exposure of the racket of the fight game, THE ABYSMAL BRUTE... [Sinclair] THE ABYSMAL BRUTE includes a frontispiece by Gordon Grant, and a binding by Decorative Designers. This is a fine copy. Sisson & Martens p. 70; Blanck 11945. (Inventory #: 13664)
$325.00 add to cart or Buy Direct from
Sumner & Stillman
Share this item

1916
(click for more details about LETTERS FROM AMERICA. With a Preface by Henry James)