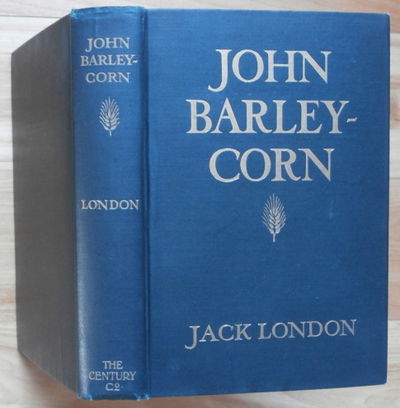 by London, Jack
1913. Illustrated by H.T. Dunn. New York: The Century Co., 1913. Original very dark green cloth. First Edition, first issue (with only one blank leaf at the rear other than the endpaper). This was London's "confessional book," a fictional but quite autobiographical tale that Jack wrote to exorcise his shame -- which bore witness to the fear behind Jack's renewed and excessive drinking... The prohibitionists had cleverly used the universal terror of syphilis to urge the crusade against the saloon. Only after a man had too much to drink -- the propaganda said -- would he pick up a woman and a disease to blight the home. With his secret fears about contamination by disease or alcohol, Jack provided in JOHN BARLEYCORN the best ammunition that the drys had ever been handed by a major writer... JOHN BARLEYCORN was sensational as the history of a man who drank too much, yet who claimed to hold his liquor. Its author only hinted at the psychological and physical fears that made him a heavy drinker, and while the book overstated the deprivation of his youth, it understated the internal disturbances and agony in his kidneys which drove him to the stupor of the bottle. "The only trouble, I may say, about JOHN BARLEYCORN," he wrote in 1913, "is that... I did not dare put in the whole truth." The truths he omitted were... the connection between his drinking and early whoring on the waterfront, his horror that Charmian's loss of her child might have resulted from a taint in his blood due to the mixed poison of alcohol and residual disease. [Sinclair] This is a near-fine copy (a touch of natural bubbling of the cloth, spine gilt less than bright). Sisson & Martens p. 72; Blanck 11946. (Inventory #: 13665)
$250.00 add to cart or Buy Direct from
Sumner & Stillman
Share this item