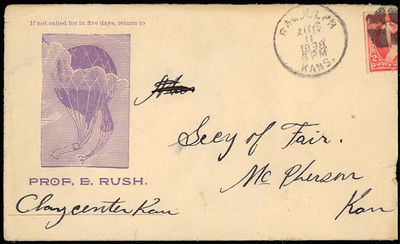 The envelope features an illustration of a man hanging by his feet from a parachute attached to an ascending hot air balloon. It is addressed to "Secy of Fair. McPherson, Kansas." The letterhead contains illustrations of "The Balloon Ascending, Leaving the Balloon, Parachute Falling Through Space, [and] The Parachute Open." The envelope is franked with a 2¢ carmine postage stamp (Scott # 250 or 251) and postmarked at Randolph, Kansas on 11 Aug 1898. The stamp and envelope were both trimmed on the right when opened. The letter is legible.

Printed text in the letterhead includes a recommendation attesting to the quality of his shows which had performed for three years at St. Joseph, Missouri. It also includes advertising copy that reads: "Prof E. Rush Madam Estella Rush / Leading Aeronauts and Parachute Artists. / Greatest Outdoor Performance on Earth. / Doing all kinds of Balloon Work. Single, Double and / Triple Parachute Leaps from one Monster Balloon. / Also Balloon and Parachute Racing". The handwritten letter inquires as to whether the McPherson, Kansas fair would be interested in hiring his troupe for the season and includes pricing for various types of performances, e.g. balloon ascensions and parachute leaps, multiple person and dog ascensions and leaps, parachute races "for hight (sic) . . . and from clouds to the earth."

Professor Rush's balloon and parachute show toured Kansas and the surrounding states in the late 1890s. Rush died shortly after mailing this proposal. He was killed during a failed balloon ascension at Grenola, Kansas on 8 October 1898.

This is a rare visual record of early American balloon and parachuting shows. Nothing similar is for sale in the ephemera or philatelic trade. It is not listed in The American Illustrated Cover Catalog, and there are no auction records of other similar items besides this example. (Inventory #: 008685)
$900.00 add to cart or Buy Direct from
Read'Em Again Books and Paper
Share this item