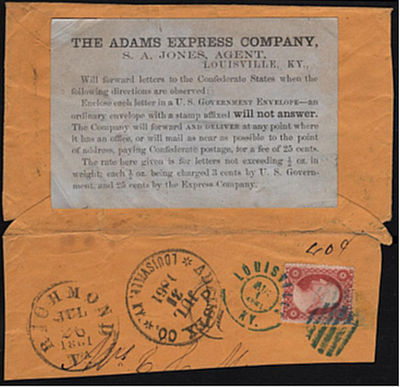 by Unknown sender
Richmond, Virginia, 1861. Envelope or Cover. Very good. This 5.5" x 3.25" 'opened' envelope has two Richmond, Virginia postal markings: a circular city postmark dated "Jul 26 1861" and a circular "Paid 10" handstamp indicating Confederate postage was paid at the time of mailing. There is also a bold strike of circular datestamp that reads, "Adams Ex. Co. * Louisville, Ky. * Jul 31 1861". The envelope additionally has 3-cent Dull Red, Type II (Scott #26) postage stamp tied with a blue grid cancel and matching blue double-circle blue postmark that reads Louisville KY. Aug 1 1861. A light blue label headed "The Adams Express Company, S. A. Jones, Agent. Louisville, Ky." provides instructions to northern recipients for sending letters to the South. The stamp, postal markings, and labels are in nice shape. The envelope has been split at the sides and bottom to facilitate display of the blue label. The lower third of the envelope front containing most of the address has been removed. The reverse of the flap fold has old tissue or archival tape reinforcement. In June of 1861, federal North-South mail routes were suspended, creating opportunities for private express companies to carry letters for higher fees (usually 15¢ -25¢ per letter) than formerly charged by the post office. Adams Express Company had been the primary express service throughout the South and Middle Atlantic states before the war, and it captured almost 80% of the relatively small "across the lines" mail service after the post office abandoned its North-South routes. Northbound letters, like this one from Richmond, needed to be enclosed in a plain unstamped envelope and addressed to the Northern recipient. They were then delivered by hand to an express office in Nashville, Tennessee. Confederate postal fees were paid at the express office or enclosed in the outside envelope. From Nashville, express couriers carried the mail across the lines to an express office in Kentucky, in this case, the Adams Express Company office in Louisville where U.S. postage was applied and letters were dispatched through the postal service to their destination. Express companies only provided this service for less than three months for on 26 August, the Louisville Daily Journal reported President Lincoln directed that "Officers and agents of the Post Office Department will . . . lose no time in putting an end to the written intercourse with [the Southern states] by causing the arrest of any express agent or other person who shall after this order, receive letters for transmission to or from said states. . . ." (See the Spiegel catalog of 27 May 2010.) Dr. James Milgram, the noted philatelist and postal historian, has suggested this envelope was likely used to send a Union POW's mail north from a Richmond prison following the Battle of Manassas (Bull Run) which occurred only a few days before. This is an important documentation of postal communication between North and South during the early months of the Civil War. All "across the lines" express mail is exceptionally scarce, and mail with the blue instructional label is truly rare as only four known examples have survived. (See Knowles at the Frajola website, 2020.) The last envelope with a blue instructional label (albeit in better condition than this one and with an equally rare provisional postmark) sold for $16,000 at Spiegel's auction of the Stephen C. Walske Collection in 2010. (Inventory #: 008713)
$3,500.00 add to cart or Buy Direct from
Read'Em Again Books and Paper
Share this item