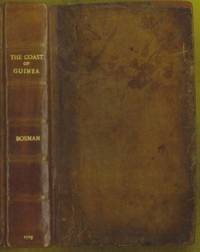 It is fortunate that there is a case for a period picture at the beginning of the eighteenth century, as there is for the purpose the brilliant account of the country's human geography by William Bosman. His work A new and Accurate Description of the Coast of Guinea, was written originally as a series of letters between 1700 and 1702. It was first published in book form in Dutch in 1703 and was followed by an accurate English edition a year later. Bosman left the country of 27 July 1702 after a stay of fourteen years. He was chief factor for the Dutch, and his trading interests took him to most parts of Southern Ghana. Bosman's work is easily the most reliable of the major works on the country produced in the eighteenth century. It thoroughly covered Southern Ghana which was fairly well known to Europeans, but was hardly concerned with Ashanti, Brong Ahafo, the inland sections of Volta Region, and Northern Ghana, about which Bosman and other Europeans only had scraps of information collected from local Ghanaian merchants. It is nevertheless possible to make good the deficiency from other sources.

The end of the seventeenth century marked a beginning of change in the development of the country's human geography. After about 1700 a series of struggles occurred among tribes with ambitions for territorial aggrandizement. Such events were known before, but the emergence of the Ashanti nation from the confusion of inter-tribal warfare as the most formidable power in the land acted as a catalyst that completely altered the character, speed and magnitude of the change of events. The human geography of Ghana took a new turn with the rise of the Ashanti. In appearance the countryside was one vast wilderness of uniformly thick forest and savanna vegetation relieved in only a few places by clearings for settlements and farms. But hidden within the forest and the savanna, and never seen by Europeans, were a vast number of rural settlements in which most of the country's population lived. Of the total size of the population no estimate can be made. I could not have been very large in view of the frequent inter-tribal wars since the final decade of the seventeenth century in which large numbers of people lost their lives or fled to neighboring countries. Ahanta, for example, was seriously depopulated through the fatal war with Adom which began in 1690 or 1691 and continued for four years. The few that survived the war in Ahanta sought protection under the Dutch for at Butri, while the greatest part of the land lay wild and uncultivated. Yet before the war the countryside of Ahanta "regaled the eyes with pleasant prospect of numerous villages well peopled." The same was true of the the states of Axim, Ankobra, Abocroe and Egwira which together could provide just over 3,000 armed men. Denkera also was completely sacked by the Ashanti in 1701 after a prolonged deadly war, and the looting, accompanied by indiscriminate slaughter of the Denkera, occupied the victorious Ashanti for fifteen days. Again, the Akwamu, through a series of wars begun towards the close of the seventeenth century, destroyed and caused considerable depopulation of the middle Densu basin and the Accra Plains. Similar reductions in population size must have occurred in Northern Ghana and elsewhere as a result of the many tribal wars. The death rate among those wounded in the wars was also high because of inadequate medical facilities. On the other hand Ashanti, which had suffered no crippling conquests and invasions, must have had a larger population than many areas of the country. Equally devastating were the numerous epidemics that periodically swept over the country. The two most deadly were smallpox and guinea worm disease, which Bosman referred to as "national diseases". Within the last two decades of the seventeenth century thousands of men perished through an epidemic of smallpox. Guinea worm disease, which as far as Bosman could observe appeared to be endemic on the whole coast, also contributed significantly to the high death rate, and there was no certain cure for either of the two diseases. Life expectation appears to have been low. "It is observable", wrote Bosman, "that there are several grey-headed people who look as if they were old, but indeed are not so; this perhaps may be owing to their too early and excessive venery, by which they do enfeeble themselves, that a man of fifty (a good old age here), seized by any sickness, generally leaves this world." Although Bosman's explanation of "too early and excessive venery" may not be valid, it was probably true that the life span for most of the population was short. It is further possible that women lived longer than and outnumbered men because of the latter's frequent involvement in war. Birth as well as infant mortality rate may also have been high. Forming an insignificant proportion of the coastal population were Europeans, who were confined to their forts, an mulattoes, the offspring of marriage or liaison between European men and African women. The mulattoes, who also lived mainly in the coastal settlements, constituted a social problem for they were accepted by neither Europeans nor Africans. Some of them were merchants, but the majority served the Dutch as soldiers. The death rate among the resident European population, which by any estimate could not have numbered more than three hundred, was high because of malaria and sunstroke, against which they had no efficacious remedies. New arrivals on the coast were more prone to malarial attacks and other discomforts, but once they survived their first few months they no longer faced the prospect of certain death through those ailments. Bosman made some shrewd observations on the need for Europeans to adapt their clothing to suit the climate, and to desist from excessive indulgence in drinking alcohol, although he conceded that Europeans at Kormantin and Apam where prone to infection by guinea worm because of the foul water they were obliged to drink there.

New spine with original boards, map rebacked with edge repair and some spotting, some spotting through out with some occasion neat old marginalia. Title with previous owner's name marked out, some edge wear to some of the pages with some soiling else a good copy of a scarce title. (Inventory #: E0036)
$2,000.00 add to cart Available from Book Collector
Share this item
The Book Collector, Inc
Offered by