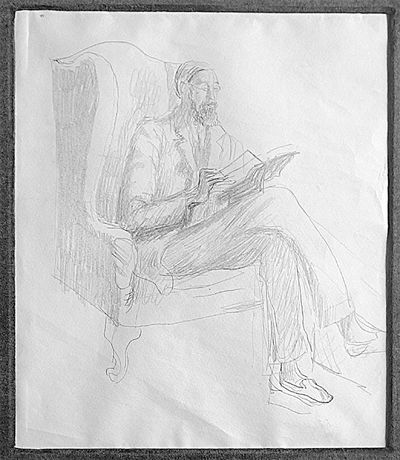 by CARRINGTON, Dora
Dora Carrington, or Carrington as she was known, was born in 1893 and attended the Slade School of Art from 1910-1914. There a number of her fellow students, notably Mark Gertler, C. R. W. Nevinson, Paul and John fell in love with her. Many more were to follow in their hopeful footsteps during her lifetime, among them Aldous Huxley, but most famously and steadfastly Lytton Strachey, whom she met and fell in love with in 1915. For the next seventeen years, Carrington and Strachey would remain devoted to each other, despite the differences in their sexual orientations, and live together from 1917 until Strachey's death in 1932. In 1921, when Carrington married Reginald "Ralph" Partridge, Strachey paid for the wedding and accompanied the newlyweds on their honeymoon to Venice. In 1924, he purchased Ham Spray House in Wiltshire for the ménage a trois, with the deed for the house in Partridge's name. Carrington's marriage to Partridge collapsed in 1928, and she continued to live at Ham Spray House with Strachey until 1932, when Strachey died of stomach cancer. Two months later, unable to imagine life without Strachey, Carrington shot herself with a gun borrowed from Bryan Guiness. As an artist, Carrington was not well known as an artist during her lifetime beyond her immediate circle of friends and acquaintances, although the woodblock prints she made for the Omega Workshops and the Hogarth Press were highly regarded. Today, her portraits and landscapes, which she refused to sign or exhibited, have elicited renewed interest and admiration. In 1995, Carrington was the subject of the film of the same name starring Emma Thompson and Jonathan Pryce, who won the Cannes Film Festival's award for best actor for his role as Lytton Strachey. On the back of the frame is the label of Anthony d'Offay. A splendid memento. Framed and glazed. (Inventory #: 23199)
$7500.00 add to cart or Buy Direct from
James S. Jaffe Rare Books
Share this item
James S. Jaffe Rare Books
Offered by

The Work of Joe Webb: Appalachian Master of Rustic Architecture. Photographs and Essay by Reuben Cox

(Highlands, NC : The Jargon Society , 2009)
(click for more details about The Work of Joe Webb: Appalachian Master of Rustic Architecture. Photographs and Essay by Reuben Cox)

Original oil portrait of the poet's wife, Marion Morehouse, oil on board, 8 1/2 x 6 1/2 inches, signed on the back by the artist, no date


(click for more details about Original oil portrait of the poet's wife, Marion Morehouse, oil on board, 8 1/2 x 6 1/2 inches, signed on the back by the artist, no date)
View all from this seller>