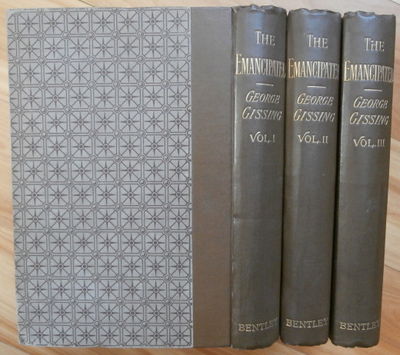 by Gissing, George
1890. [a handsome copy] A Novel. In Three Volumes. London: Richard Bentley and Son, 1890. Original patterned paper-covered boards with brown cloth spines. First Edition, which consisted of 1,000 copies (of which, according to the publisher, only 492 were sold -- but that may have been Bentley's ruse to avoid paying Gissing "bonuses" that would kick in if 850 or all 1,000 were to sell). The young widow Miriam Baske leaves grey Lancashire for the sun of Naples, Italy, where she finds herself among many of her countrymen in a vastly different social scene -- similar to some of Henry James's accounts of transplanted Americans and Britishers, and reminiscent of MIDDLEMARCH. The novel marked the beginning of Gissing's series of psychological novels, "which were less concerned with the effects of environment and more concerned with the emotional and intellectual conflicts experienced by socially alienated characters" [Collie]. This was the only one of Gissing's novels to have been published by Bentley -- though Bentley had earlier paid for but not published MRS. GRUNDY'S ENEMIES, suppressed on moral grounds. For Bentley in the 1890s, this is quite a tame binding; trying to stave off the demise of the three-decker format, Bentley came out with some outrageously florid bindings in the final years (the three-decker died in 1894 anyway). This is a bright copy, just about fine; since in 1890 most copies of three-decker novels were still being bought up by the lending libraries, the first edition of THE EMANCIPATED in this condition is now extremely scarce. Coustillas A8.1; Collie A8a; Spiers & Coustillas L1; Sadleir 966; Wolff 2546. Provenance: each front paste-down bears the discreet ink-stamp of Francis Stuart Burd (collector of Rochester NY), who in 1958 bought a major Gissing collection from Max Clements Richter (who had been a consul in the U.S. State Dept.) via Gilboy's House of Books; manuscript material of this transaction is today held at the University of Manchester. (Inventory #: 13726)
$2,500.00 add to cart or Buy Direct from
Sumner & Stillman
Share this item