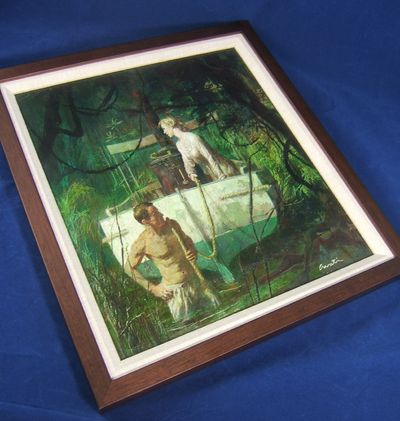 by Forester, C. S. [James Avati, Cover Artist]
1960. [Avati, James] [Forester, C. S.] UNIQUE ORIGINAL ARTWORK BY JAMES AVATI FOR THE 1960 BANTAM PAPERBACK, THE AFRICAN QUEEN, BY C. S. FORESTER. One of the few extant Avati paintings illustrating major works by major 20th century authors still available to commerce. 14 x 12 inches, executed in oil on board-mounted canvas, colors still bright and vivid, in strikingly fresh condition. Museum quality framed-and-matted to a dimension of 16 x 14 inches. Avati's original painting for the first paperback version of Salinger's CATCHER IN THE RYE (1953) recently sold for $21,510.00 at auction (October, 2010). His original painting for the first paperback version (1952) of Christopher Isherwood's GOODBYE TO BERLIN (auctioned July 2009) fetched $26,290.00. James Avati (1912-2005) was often called "The Rembrandt" of 1940s and 1950s paperback illustration. He popularized authors such as William Faulkner for the average reader with alluring cover art which sported extraordinary emotional impact. His brilliance in capturing human feeling: tension or pain, suggestiveness or lust, avarice or suspicion, compassion or devotion was unrivaled during the golden age of paperback illustration. He created a visual narrative that brought characters' tragedies and yearnings to life with a tough-minded gritty realism without any compromising sentimentality. In the primary reference book "The Paperback Art Of James Avati" (Piet Schreuders & Kenneth Fulton, 2005), this painting is illustrated on p. 160. The distinction of this painting may be obvious to those familiar with Avati's work: the lush jungle green landscape which surrounds the central figures is an unusually dynamic departure for Avati and his decision to interpret the novel's most iconic image, Charlie and Rose pulling the celebrated "African Queen" through the twisted, overwhelming jungle vines of the Ulanga River in German East Africa in an attempt to outfox the World War One German Imperial Forces, has produced something very special. John Huston's film version starring Humphrey Bogart (in his only Oscar-winning role) and Katharine Hepburn is one of the American Film Institute's 100 best films ever made. The novel itself is today, along with the Horatio Hornblower series, the best known and best loved of C. S. Forester's (1899-1966) lifetime achievement of more than fifty works of fiction. James Avati produced this painting for Bantam Books #A2111 in August of 1960. . Signed. Unbound. Near Fine. Illus. by James Avati. (Inventory #: 002405)
$14,500.00 add to cart Available from
Lakin & Marley Rare Books
Share this item
Lakin & Marley Rare Books
Offered by