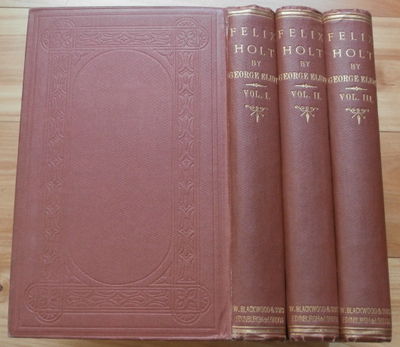 by Eliot, George
1866. In Three Volumes. Edinburgh and London: William Blackwood and Sons, 1866. 4 pp undated Vol III ads. Original reddish-brown cloth decorated in gilt. First Edition of what must certainly be considered the author's least memorable novel. In a small town in 1832 (just after the passage of the Reform Bill), Felix Holt has lost faith in the political system because it seems that no elected officials truly care about the interests of the working class: imagine! Harold Transome is the son of a wealthy landowner. Both become radicals, and both vie for the hand of the same woman. George Eliot's husband first approached Smith, Elder, who had just published ROMOLA, but they refused it; he then contacted her old publisher Blackwood (not mentioning Smith, Elder's refusal), who, delighted to get her back, offered 5,000 pounds for the copyright for five years. Blackwood's magnanimous offer, and his need to recoup it, caused FELIX HOLT to be overproduced, and to this day it is not a scarce book. It was issued in five different bindings, labeled "A" through "E" by Carter. Carter asserted that "A" through "C" were simultaneous primary bindings, that "D" (the easiest one to find in fine condition today) was a later binding, and that the blue "E" was a still later (though uncommon) one: ... it is difficult to believe that the variations in A, B and C have any significance. Probably several machines were working on the job at the bindery, and the differences in the ornaments and lettering would be accounted for by a shortage of any one particular set of brasses. This set is in binding "B". It is a handsome set, fine except that there is some discreet cracking (and re-gluing) of three endpaper gutters; there are also two bookplates. We seldom see any of the three primary bindings in any better condition. Sadleir 814 (bindings "B" & "E"); Wolff 2058 (binding ["D"]); Carter BV pp 111-2 (& plate VIII). Housed in an open-back slipcase. (Inventory #: 13740)
$1,150.00 add to cart or Buy Direct from
Sumner & Stillman
Share this item