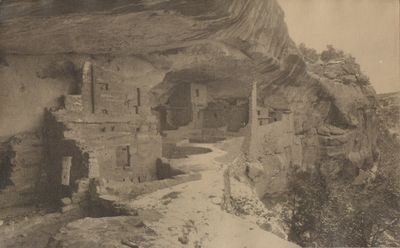 by Pennington, William
Very Good. Toned photograph of Balcony House, Mesa Verde National Park in winter. Photograph taken after 1910 excavation. Photograph is b&w and measures 16" wide by 10" tall. Light wear and soiling to corners and light soiling to back of photo. 1/8" size chip near right edge. After reviewing a collection of 24 photographs acquired from the Pennington heir collection, it seems that most said photographs were artist proofs due to many identical images with slight variations in exposure. William Marion Pennington photographed people and landscapes across the Southern United States in the early 1900's. In 1907, he and fellow photographer, Lisle Updike opened Pen-Dike Studio in Durango, Colorado; Pennington managing the studio, doing portrait work and operating the dark room, and Updike taking photos in nearby towns and mining camps. In 1911 Pennington took sole control of the studio and renamed it Pennington Studio. Around this time he also obtained a contract from the National Park Service to photograph the cliff dwelling at Mesa Verde National Park. This photograph depicts Balcony House, which was occupied by the Ancestral Puebloans from around A. D. 1180 to 1280 and has 40 rooms. Along with many of the other cliff dwellings at Mesa Verde, occupation at Balcony House ended around A. D. 1300. ; 1 pp . (Inventory #: 013402)
$1,250.00 add to cart Available from
Back of Beyond Books
Share this item