Collection of 19 Postcards with Relief Depictions of Flowers, Fruits and/or Birds 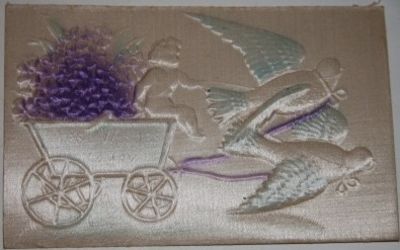 Near Fine. All the cards are circa the first decade of the 20th century. Most, if not all, were made in Germany, the country best known for such fancy printing. The cards generally have a simple sentiment written, such as "Greetings", with a few devoid of a textual message at all. Some of the cards have something extra, such as felt, a silk trim, a lace perimeter, or a thickness from a slice of wood. They are typical postcard sized, 14 by 9 cm, with trivial variations on this. While a few were unused, most were sent to one of a few people living in Pennsylvania. Clearly these were collected by someone who was fond of these relief postcards. (Inventory #: 005490)
$100.00 add to cart Available from
White Fox Rare Books & Antiques
Share this item
White Fox Rare Books and Antiques
Offered by