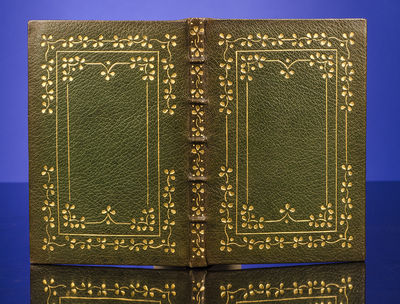 Bound in 1922, stamp-signed "A - S 1922" in gilt on rear turn-in. Full dark green levant morocco, covers decoratively tooled in gilt with a framework of flowers and stems surrounding a gilt ruled border which in turn surrounds another gilt border with similar floral tools in the corners and top and lower edges. Spine with five raised bands, decoratively tooled with the same floral design in compartments. Gilt ruled board edges, and wide turn-ins with triple gilt rules and the same gilt flower ornaments in the corners, all edges gilt. Minimal darkening to spine. A very fine example.

Although we have been unable to ascertain the identity of "A - S" this binding is most likely by a student of one of the great binders of the early twentieth century. It is unusual inasmuch as all of the six spine panels have been decoratively tooled in gilt - but with no lettering.

James Stephens (1880-1950) was an Irish novelist and poet. By the early 1900s James was increasingly inclined to socialism and the Irish language and by 1912 was a dedicated Irish Republican. He was a close friend of the 1916 leader Thomas MacDonagh, who was then editor of "The Irish Review" and deputy headmaster in St Enda's, the radical bilingual school run by P.H. Pearse and would be manager of the Irish Theatre, and spent much time with MacDonagh in 1911. He produced many retellings of Irish myths and fairy tales. His retellings are marked by a rare combination of humor and lyricism -Deirdre (1923) and Irish Fairy Tales (1920) are often especially praised. He also wrote several original novels including The Crock of Gold, Etched in Moonlight, and Demi-Gods based loosely on Irish fairy tales. The Crock of Gold in particular has achieved enduring popularity.

Stephens began his career as a poet under the tutelage of George William Russell, 1867-1935, the Irish writer, editor, critic and poet who wrote with the pseudonym "Æ". His first book of poems, Insurrections, was published in 1909. Green Branches contains three poems (The Autumn in Ireland: 1915; The Spring in Ireland: 1916 and Joy be with us) was written just before The Easter Rising (also know as the Easter Rebellion), an armed insurrection in Ireland during Easter week. Stephens's influential account of the 1916 Easter Rising, The Insurrection in Dublin, describes the effect of the deaths by execution of his friend Thomas MacDonagh and others. Stephens lived between Paris, London and Dublin. During the 1930s he was a friend of James Joyce, and they mistakenly believed that they shared a birthday. Joyce, who was concerned about his ability to finish what later became Finnegans Wake, proposed that Stephens assist him, with the authorship credited to JJ & S (for "Jameses Joyce & Stephens", but also a pun on the popular Irish whiskey made by John Jameson & Sons). The plan was never implemented, as Joyce was able to complete the work on his own. (Inventory #: 04162)
$1,250.00 add to cart or Buy Direct from
David Brass Rare Books
Share this item