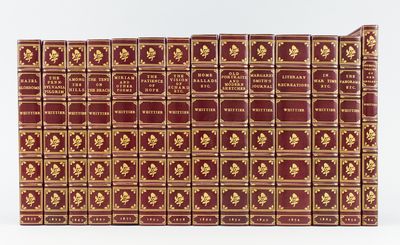 by WHITTIER, JOHN GREENLEAF. (BINDINGS - ROOT & SONS)
London or Boston, 1847-78. Octavos of varying sizes. Publisher's blind-stamped cloth, (later) glassine dust wrappers, TWO VOLUMES UNOPENED. In excellent matching burgundy morocco-backed clamshell boxes by W. Root & Son, backs with raised bands, gilt compartments with central floral sprig and gilt titling, marbled lining. Half the spines a little sunned, occasional small spots or dents to boards, but THE ORIGINAL BINDINGS ESSENTIALLY UNWORN, UNUSUALLY CLEAN, AND WITH THEIR EMBOSSED DECORATION ESPECIALLY SHARP. Leaves a shade less than bright because of paper stock, but very clean, with only isolated trivial spots; overall A VERY FINE GROUP, especially well preserved in their attractive boxes. This is an excellent selection of the more substantial poetry and prose publications by John Greenleaf Whittier (1807-92), attractively presented and well protected in their bespoke clamshell boxes. The titles here are: "The Supernaturalism of New England" (1847); "Leaves from Margaret Smith's Journal in the Province of Massachusetts Bay" (1849); "Old Portraits and Modern Sketches" (1850); "Literary Recreations and Miscellanies" (1854); "The Panorama and Other Poems" (1856); "Home Ballads and Poems" (1860); "The Patience of Hope" (1862); "In War Time and Other Poems" (1864); "The Tent on the Beach and Other Poems" (1867); "Among the Hills and Other Poems" (1869); "Miriam and Other Poems" (1871); "The Pennsylvania Pilgrim, and Other Poems" (1872); "Hazel-Blossoms" (1875); and "The Vision of Echard and Other Poems" (1878). A Quaker who edited a number of newspapers and spent time as a Massachusetts legislator, Whittier invested as much passion in his abolitionist campaigning as he did in his poetry. But in Day's words, "Whittier won his place in New England literary circles by his genuine poetic talent and his felicity in detailing the homey aspects of New England life. Along with Thoreau, he favored life in the country, and celebrated his rural environment in much of his poetry. . . . The topical poetry that established his fame has lost much of its pertinency, but the wholesome simplicity and convincing vitality of his rural lyrics still attract 20th century readers." Besides a group of works by an important American poet, the present item represents an assemblage of unusually well-preserved publisher's cloth bindings, each in an attractive case made by a long-lived name in English binding. The London bindery of William Root & Son consistently turned out excellent work, both on fine bindings and on trade bindings of multi-volume sets. Packer lists the firm in business in Red Lion Square in 1899-1901, and the December 1942 issue of "The Rotarian" notes with regret that Root had been bombed out of their premises on Paternoster Row during the 1941 Blitz. (Inventory #: ST13575)
$3,120.00 add to cart or Buy Direct from
Phillip J. Pirages Fine Books
Share this item