16th-century leaf with illustrations of deformed births including a human-headed horse, a child born with wings, and a girl born with two heads from Ambroise Paré's Monsters 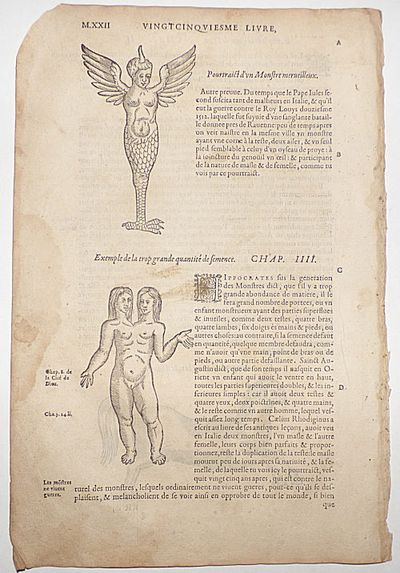 by Ambroise Paré
Paris: Chez G Boun, 1585. Unbound. Very good. This leaf (M.XXI-M.XXII) measures approximately 8.25" x 12.5" and came from the 1585 printing of Les Oeuvres d'Ambroise . . . Des Monstres. The images are strong. The leaf has some minor soiling and edge-wear. The three images on this leaf show (roughly translated from Paré's French) 1) a horse born with a human head, 2) a child born with wings, a horn, one bird's leg, and the privaties of both male and female. And 3) a perfectly formed girl with two heads who had been banished from her town for fear that her sight might cause other women to conceive similar children. Paré also summarizes eleven causes that some believed to cause births like these including God's punishment for wickedness, over or under eating while pregnant, the effect of imagination, a misformed womb, seeing a horrible sight while pregnant, an injury to the midsection while pregnant, a mingling of seed (presumably from more than one man), and the wickedness of the devil. Paré, the French royal surgeon for many years, was the preeminent surgeon of his time and is considered one of the fathers of surgery and modern forensic pathology as well as a pioneer of surgical techniques, battlefield medicine, and prosthetic design. He additionally had a scholarly interest in natural history, especially reports of "miraculous" or "monstrous" creatures and malformed births. (Inventory #: 008783)
$150.00 add to cart or Buy Direct from
Read'Em Again Books and Paper
Share this item