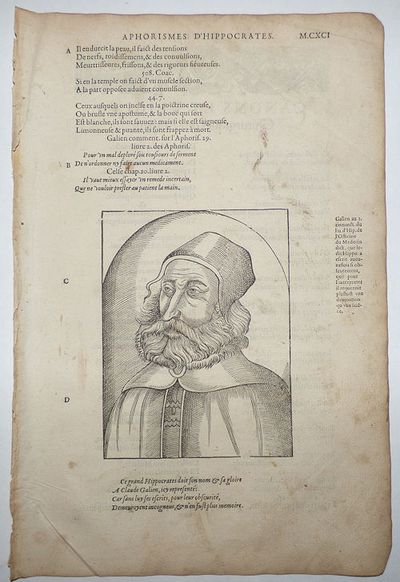 by Ambroise Paré
This leaf (M.CXCI-M.CXCII) measures approximately 8.25" x 12.5" and came from the 1585 printing of Les Oeuvres d'Ambroise . . . Aphorismes. The image is strong. The leaf has some minor soiling and edge-wear.
Aelius Galenus or Claudius Galenus, sometimes known as Galen of Pergamon, was a physician, surgeon, and philosopher in the Roman Empire. He is considered one of the most accomplished of all medical researchers in antiquity.
Galen influenced the development of various scientific disciplines, including anatomy, physiology, pathology, pharmacology, and neurology, as well as philosophy and logic. He travelled extensively, exposing himself to a wide variety of medical theories and discoveries before settling in Rome, where he served prominent members of Roman society and eventually was given the position of personal physician to several emperors. Galen's views dominated and influenced Western medical science for more than 1,300 years.
Paré, the French royal surgeon for many years, was the preeminent surgeon of his time and is considered one of the fathers of surgery and modern forensic pathology as well as a pioneer of surgical techniques, battlefield medicine, and prosthetic design. He additionally had a scholarly interest in natural history, especially reports of "miraculous" or "monstrous" creatures and malformed births. (Inventory #: 008798)
$99.00 add to cart or Buy Direct from
Read'Em Again Books and Paper
Share this item