Defeat the War-Powers Bill: Get Out and Stay Out of the War 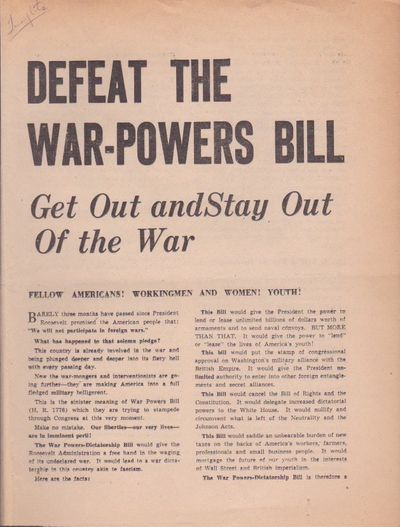 by Communist Party, U.S.A.
Communist Party, U.S.A. Defeat the War-Powers Bill: Get Out and Stay Out of the War. San Francisco: California State Committee, Communist Party, n.d. [1941]. Bifolium of newsprint folded to create four pages of approximately 8 1/2 x 11 inches (217 x 280 mm).
A vigorous denunciation of what became known as Lend-Lease, where the US. supplied military assistance to Britain and other Allied countries beginning in 1941. Here the Communist Party appeals for the U.S. to stay out of foreign wars, arguing that Wall Street bankers -- referred to here as a "bandit gang" and "the crafty minds of the House of Morgan" -- are the ones who benefit from war.

"The workers and farmers, the people of America, have nothing to gain from war. Only the Morgans, the Rockefellers and du Ponts -- only the imperialist scavengers -- feast on the blood of imperialist war," the leaflet states, in the Communist Party's typically overwrought style.

This leaflet was published in early 1941 as Lend-Lease legislation was moving through Congress. Despite the opposition of the Communists on one side and right-wing isolationists on the other, the legislation passed Congress and was enacted in March 1941. This was just months before Germany invaded the Soviet Union. Needless to say, the Communist Party would soon change its tune, arguing for an all-out effort to defeat Hitler. And, indeed, Lend-Lease was used to aid the Soviet Union.

Rare, with no institutional holdings found in OCLC. None in commerce.

An interesting artifact reflecting the Communist Party's antiwar position right before the German invasion of the Soviet Union.