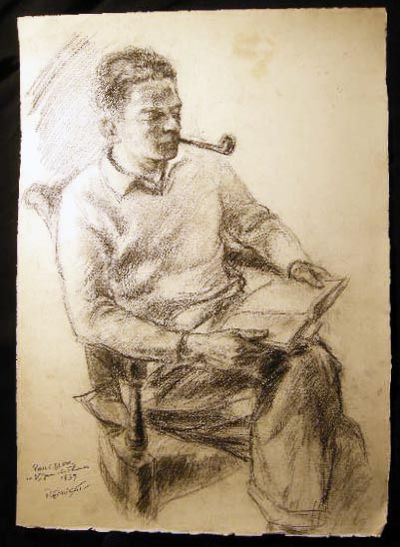 by (Art - 20th Century - OSS -France - Claude Remusat - Friendship)
St. Jean-Le-Thomas France: Not Published, 1937. Original charcoal seated ¾ length portrait, inscribed to the sitter "Paul C. Blum in St. Jean-le-Thomas 1937 (signed) Remusat" by Claude Remusat (1896-1982) French artist, decorated World War I veteran and close friend of American Paul C. Blum (1898 - 1981), Yale graduate, who was engaged in espionage activities for the United States via the OSS and the subject of the 1998 biography "Blum - San! Scholar, Soldier, Gentleman, Spy" by his nephew Robert S. Greene (1922-2013) American writer, jazz musician, documentarian and historian. Approx. 15" x 20 ¾" size; accomplished on heavy, good quality Rives watermark paper; some smudging, spotting to the image & background; in very good condition. (With) a 1981 black marker on paper of the backstage area of the Ballet "coulisses" signed and inscribed "For Paul C.B. Bonne Annee 1981 de tout coeur - as ever," 12" x 14 ¾" ; and a pencil sketch head portrait of Bob Greene , signed "Remusat - for Bob Greene Paris 23 Dec 1980" 9" x 14" on plain paper (little spot below signature) and with a paper window-overlay; and an ink on paper drawing of dancers, inscribed "Remusat - To Bob Greene affectionally Xmas eve 1980 Paris" 11 ¾" x 14 ¾". (With) 6 black and white photographic prints of Remusat portraiture: Paul C. Blum, Shostakovich, Khachaturian, Ruggero-Gerlin, Hindemith, Alfred Cortot. Also with a photograph of Remusat's house in St. Jean-le-Thomas taken in 2007 and two portraits of the artist, both mounted in frames, one taken from a periodical and the other a digital image, now degraded to yellow-green tones. With the 1994 catalog of Remusat's works "Les Americains dans l'Avranchin" French & English text, 1994 commentary on the works and times, with biography of the artist; (24) pages, oblong format, color illustrated, light wear and in very good condition. The Yale Guide to the Paul Charles Blum Papers (MS 900) state that Blum "was born on March 31, 1898, in Yokohama, Japan, and spent his childhood in Japan, Switzerland, France, and New York Citya private in the Yale R.O.T.C. and enlisted in the U. S. Ambulance Service in 1917. He was sent overseas in 1918, and served with the French army from March 1918 to March 1919awarded the Croix de Guerre returned to the United States in 1919 and graduated from the Sheffield Scientific School, Yale University, in 1921. Following graduation, Blum was a literary agent and free-lance writer. He joined the Foreign Service during World War II, remaining until 1954. Blum retired to Japan, where he lived until his death in 1981" In WWII, Blum was station chief for the OSS in the X-2 counterintelligence department in Bern, Switzerland. During his earlier military service in France in WWI he became closely acquainted with the artist Claude Remusat and the men maintained their friendship throughout their lives. Blum's nephew and biographer Bob Greene was early introduced to Remusat by his uncle and after Paul Blum's death, remained in close friendly contact with Remusat as well until the artist died. Blum was also a noted collector of books and manuscript materials on early Japan and that country's early interactions with the West, endowing the Collection at the Yokohama Archives of History Library with 7,000 items, including foreign books and magazines about Japan dating back to the 16th century, old European maps of Japan and Asia, and Japanese woodblock prints. Friendship extending across generations, through two wars and peace, illustrated. Provenance: Directly from the estate of Robert S. Greene. . Original Art. Not Bound. Very Good. Illus. by Claude Remusat. (Inventory #: 24346)
$650.00 add to cart or Buy Direct from Certain Books
Share this item
Certain Books
Offered by

Nails the Inside Story of an Amazin' Season

by Dykstra, Lenny with Marty Noble

September 3, 1922 Balieff's Chauve-Souris Program Given in the Garden of the Parrish Art Museum, Southampton, Long Island for the Benefit of the Rogers Memorial Library