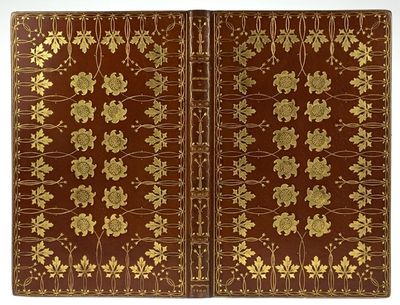 by Tennyson, Alfred Lord
New York; London: M. F. Mansfield; At the Sign of the Unicorn, [1900]. Tall 8vo. A wonderful binding by Riviere in full brown goatskin, both covers tooled in gilt with a unique all-over heavy gilt design consisting of a border of a fillet and intertwining gouges, with stems formed by gouges and fillets issuing inwards with closed flower heads. As well, there are twelve magnificent open flower-heads running longitudinally at the center. The central panel of twelve flower heads is most aesthetically pleasing. The spine is divided into six panels with gilt compartments, lettered in the second and dated at the foot, the others with stems and small flower-heads, the edges of the boards tooled with a repeated dot, the turn-ins with two gilt fillets, marbled endleaves, top edge gilt, the others untrimmed. The bindings is signed with Riviere's gilt pallet on lower front turn-in; as well, there is an inked pallet of Henry Sotheran on the top front fly, who may have commissioned the binding from Riviere.The binding is fine. An unusual and scarce publication, the colophon reads: "Of this Edition Five Hundred Copies were Printed by The Bankside Press and are Offered for Sale by M. F. Mansfield, New York, September, MDCCCC", and beneath this is an ink inscription "This is No.8 of 100 copies reserved for Great Britain." (Inventory #: 3491)
$4,250.00 add to cart or Buy Direct from
Nudelman Rare Books
Share this item