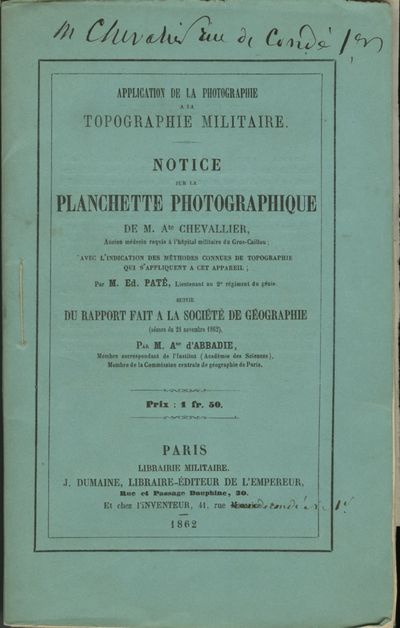 by Paté, M. Ed. [Jean Pierre Édouard]
Paris: Librairie Militaire. J. Dumaine, 1862. First edition. 8vo., 31 pp., albumen photographic frontispiece, 1 leaf of diagrams, 1 large folding engraved plate. [bound with] D'Abbadie, A. RAPPORT SUR LA PLANCHETTE PHOTOGRAPHIQUE DE M. AUGUSTE CHEVALLIER. Extrait du Bulletin de la Société de Géographie, (Décembre 1862.) (Paris: Impriemerie de L. Martinet) 14 pp. Both are bound in the original printed wrappers which list both works; however, the street address of J. Dumaine, the publisher, has been changed in holograph. Also written in holograph on the top blank margin of the front wrapper "M. Chevallier, rue du Condé 1". Fine, bright, as new, housed in a paper over boards pamphlet case with printed labels. These are two testimonials to Auguste Chevallier, for his ingenious adaptation of a photographic camera to make a surveying plane-table, an essential tool in topographic mapping. He was able to achieve a panoramic image, without overlapping or distortions by using an objective with a rotary movement and collodion plate affixed to "a moving vertical wheel articulated at right angles, with a fixed horizontal wheel, the teeth of which force the vertical wheel to terminate a complete revolution upon itself at the precise moment when its horizontal axis has finished its tour of the horizon." The Photographic News, February 20, 1863, p. 95. In 1866, Chevallier introduced an improved panoramic camera for the same purpose. WorldCat locates 12 copies, but only the New York Public Library copy indicates both titles. It is possible that the first title was issue independently, and when the extract by D'Abbadie was released in December 1863, J. Dumaine obtained copies and modified the wrapper title to include both parts, as in our copy. This would also explain the modification to his address. Roosens and Salu No. 7036 (first title). Bellier de la Chavignerie, Manuel Bibliographie du Photographe Francais, 1863, No. 131 (first title). (Inventory #: 52081)
$2,000.00 add to cart or Buy Direct from
Andrew Cahan: Bookseller
Share this item
Andrew Cahan: Bookseller, Ltd.
Offered by

[Augusta, Maine] : Entered according to Act of Congress in the year 18[5]9 by Scofield Leavit in the Supreme Court of Maine , 1859
(click for more details about INSTRUCTIONS FOR ROMAN CHRYSTALLOTYPE PAINTING, TAUGHT BY JOHN M. DONAHOE)

London : John Murray , 1847
(click for more details about ENGLISH ETYMOLOGIES)
View all from this seller>