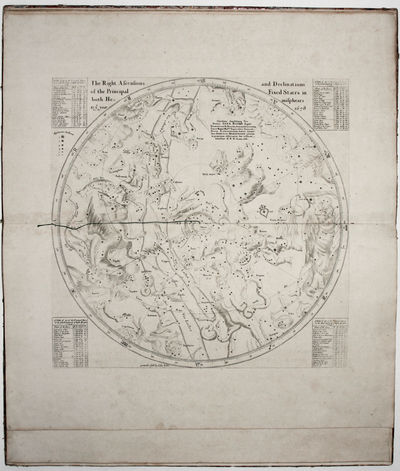 by SELLER, John, senior / SENEX, John / HALLEY, Edmund / FLAMSTEED, John.
London: Senex et al.,, 1675. Hardcover. Very Good. Folio [66.5 x 3.90 cm]. (8) double-page engraved celestial and astronomical charts (see below for full contents). Bound in contemporary marbled boards with vellum spine, red sprinkled edges. Wear to head of spine, lettered on spine with title 'Stelleri Zodiacus Stellatus', rubbing to boards and board edges, bookplate of Macclesfield Library inside upper cover, shelf mark on front pastedown. A few minor edge mends to charts, very minor and entirely unobtrusive worming to a few leaves, very minor marginal hand soiling to a few charts, blind stamp of Macclesfield crest on blank first three leaves, the hemisphere charts with green marker threads intact. An intriguing collection of 8 very rare early English astronomical charts by the London cartographers and instrument makers John Seller (c. 1630-1697) and John Senex (c. 1678-1740), offering the most up-to-date celestial information then available, with several of the charts based on the recent groundbreaking observations of the English astronomers Edmond Halley (1656-1742) and John Flamsteed (1646-1719). The present volume - preserved in its contemporary binding - is perhaps to be associated with Seller's elusive folio-format Atlas Coelestis, a work he is known to have advertised in catalogues, but which has never been definitively described or identified. The present volume may represent the core of this Seller atlas as later revised and issued by Senex (together with charts of his own making), but whatever the genesis of this collection, it is a valuable witness to the leading role played by English astronomers and publishers in the field of celestial cartography in the last years of the 17th-century. The 4 charts bound at the end of the volume - 2 treating the stars of the northern hemisphere, 1 depicting those of the southern hemisphere, and 1 zodiac map - date from the 1670s and are from the shop of Seller, who collaborated with Halley upon the astronomer's return in 1678 from island of St. Helena where he had catalogued southern-hemisphere stars for nearly two years. Halley produced a detailed chart from his coordinates (engraved by Jacob Clark) which was the first celestial hemisphere made from telescopically derived locations of the southern stars (Kanas, p. 122), and the present Australis Hemisphaerii tabulam by Seller is slightly altered issue of this work (with the addition of the Milky Way) published within a year of Halley's effort (Warner, p. 107, no. 1B and p. 236, no. 4B). Also included here is Seller's 1679 Zodiacus stellatus, "the first published zodiac," which was advertised in the Easter Term Catalogue of 1679 as "being very useful, at all times, to find out the places of the Planets; wherein may be seen their daily motion, and their appulses to the Fixed stars. Accurately laid down by the said Mr. Edmund Halley" (Warner, p. 233, no. 3). These charts could be acquired from Seller individually and rarely are to be found bound in his Atlas Maritimus. The present atlas thus represents a rare artifact reflecting the state of English astronomy at the turn of the 18th century, when "the internal relations between scientists, cartographers, publishers, and dealers were often so complex as to obscure the specific contributions of each" (Warner, p. 237). The present volume carries the bookplate of the Library of Earls of Macclesfield, and it is worth noting that George Parker, 2nd Earl of Macclesfield, who himself was an astronomer of some ability, first became a member of the Royal Society in 1722 just as John Senex was publishing his Halley/Flamsteed charts (Senex would be elected a member of the Royal Society in 1728). This provenance would seem to make it all the more likely that the volume represents an integral atlas as issued by Senex. * D. J. Warner, The Sky Explored: Celestial Cartography, 1500-1800; N. Kanas, Star maps: History, Artistry, and Cartography. (Inventory #: 5560)
$45,000.00 add to cart Available from Martayan Lan
Share this item
Martayan Lan, Inc.
Offered by