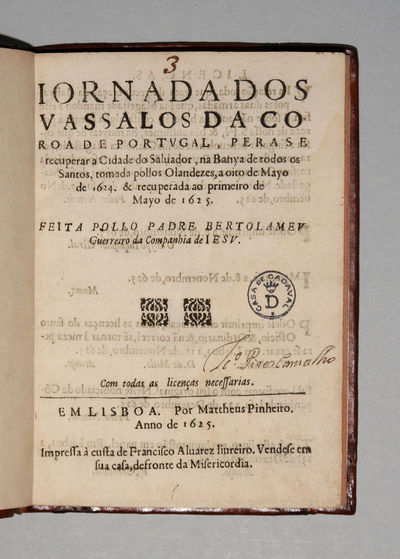 by GUERREIRO, Bartolomeu
Lisbon: Mattheus Pinheirio, 1625. No Binding. Very Good. 4to in eights [19.5 x 14.4 cm]. 74 ff., (1) folding engraved plate. Bound in elaborately stamped contemporary calf, rebacked, red sprinkled edges; later pastedowns & endpapers. Shelf marks and old auction ticket from 1952 on front flyleaf. Rubbing and edge restorations to binding. Stamps of the Casa de Cadaval library (front flyleaf, title, and verso of engraving), contemporary inscription of Lourenço (?) Pires Carvalho on title, a few contemporary marginal annotations, small marginal worm track to a few leaves, minor toning to a few quires. Generally very good. Rare contemporary Portuguese account of the Dutch conquest in May 1624 of the principal Brazilian city, Salvador da Bahia, a brief victory that was reversed less than a year later by the largest armada ever sent to the Americas. This Dutch attempt to establish a colony in Brazil was the first episode in a 30-year war with the Portuguese and Spanish that had a lasting effect on the balance of European powers and colonial holdings. As Portuguese-language accounts are notably rarer than their Dutch counterparts, Guerreiro's history is a valuable record of the Portuguese interpretation of events. His Jornada was published just 6 months after what has been called the "Day of the Vassals" (May 1, 1625), when the Dutch surrendered to a force of 52 ships and more than 12,000 men. According to Borba, it is "One of the classic source books for the recapture of Bahia" (I.380). The Dutch long had commercial interests in Brazil, and established several trading networks in the early days of Portuguese rule. However, during the Spanish Captivity of Portugal (1580-1640), a new policy allowed Dutch merchants found in the newly Spanish colonies to be detained. Taking umbrage at this, and convinced that capturing Salvador would not be difficult, the Dutch launched an expeditionary force in December 1623 that included 26 sailing ships, 450 guns and 3300 men under Admiral Jacob Willekens and the notorious Vice-Admiral Piet Hein. Arriving in the Bahia de Todos os Santos on 8 May 1624, the fleet landed a few miles from Salvador. The Dutch troops, under the command of Jan Van Dorth, entered the town early on the morning of May 10, 1624, at which point the Portuguese governor, Diogo de Mendonça, swiftly surrendered. The Dutch victory caused an uproar in Spain and Portugal-King Philip IV vowed publicly that he would personally make the journey to Brazil to retake Salvador (letters from the king are transcribed in chapter 31 of the Jornada). While the king did not personally go to war, thousands of Portuguese vassals rallied under Dom Manuel de Menezes, who joined with the Spanish Armada under the general Dom Fadrique de Toledo y Osório. A massive fleet of 52 ships, 1185 guns and 12,566 men-second only in size to the famous armada of 1588-set sail for Brazil, reaching Salvador on Easter Eve 1625. Reinforcements arrived from Rio de Janeiro, Espirito Santo and Pernambuco in early April. The Dutch were demoralized and capitulated on 30 April 1625, the day after the Portuguese entered the town. Guerreiro proudly recounts the circumstances and major players involved in both the Dutch attack and the Portuguese victory. Bartolomeu (or Bartolameu) Guerreiro S.J. (1564-1642) published a volume of sermons (Lisbon, 1624), as well as a substantial Jesuit martyrology, Gloriosa coroa d'esforçados religiosos da compenhia de Jesu (Lisbon, 1642). OCLC U.S.: Cornell, Catholic University, Brown. * Borba I.380; JCB II.192; Rodrigues 1168; Samodães 1472; De Backer-Sommervogel III.1912.2. (Inventory #: 5605)
$18,500.00 add to cart Available from Martayan Lan
Share this item
Martayan Lan, Inc.
Offered by