Of the Wood Called Guaiacum that healeth the frenche pockes, and also helpeth the goute in the feete, the stone, palsey, lepre, dropsy, fallyinge euyll, and other diseses. 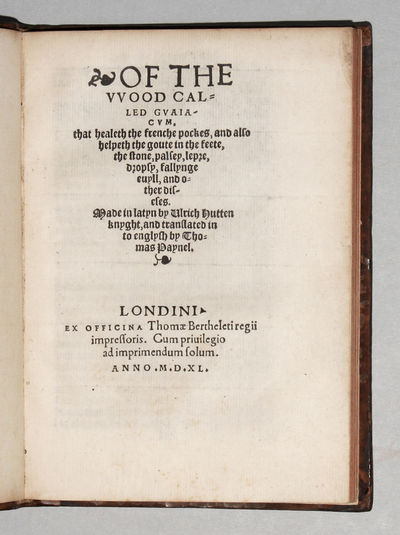 by HUTTEN, Ulrich von
London: Thomas Berthelet, 1540. Hardcover. Near Fine. 4to [19.7 x 13.9 cm]. (3) ff., (1) ff. integral blank, 58 ff., with numerous figural woodcut initials. Bound in early calf, boards with blind double-ruled borders, gold-tooled board edges, red sprinkled edges. Neatly rebacked, corners renewed, minor rubbing to boards, bookplate of Cornelius J. Hanck inside upper cover, typed description inside lower cover. Small pale dampstain in lower margin, contemporary annotation to fol. 3, some edge wear and minor marginal spotting to the final three leaves. Very fresh, excellent. Rare 1540 (first quarto) Tudor translation of an important early medical work on the curative properties of the American wood known as 'guaiacum,' a text first published in Latin in 1519 as De Guaiaci Medicina et Morbo Gallico by the German scholar, poet and reformation thinker Ulrich von Hutten (1488-1523). Hutten's treatise, which was quickly translated into several languages, popularized the use of guaiacum to treat several conditions, especially the New-World scourge of syphilis, and accelerated the import of this botanical from the Caribbean. Indeed, the work likely convinced the Fugger banking family of Augsburg to seek a monopoly on the import of the drug from the Americas, a concession they later secured from the Spanish crown in exchange for a loan (Flood, p. 29). In Of the Wood Called Guaiacum, Hutten not only gives a full and nuanced account of the appearance of syphilis in Europe along with its various treatments, but also recounts in detail his own struggle with the affliction (at one point, a friend councils him to commit suicide) and the various therapeutic (and sometimes gruesome) regimens he was subjected to, making the treatise one of the earliest patient narratives published. "This tract had enormous resonance in 16th-century medical circles . Hutten was the first significant publicist for the Guaiac treatment . Hutten's descriptions of the therapy are the most accurate of the period, and the account of the qualities of Guaiac is worthy of any modern pharmacopoeia . it remained influential into the 18th century" (Jillings, p. 5). Hutten notes the first arrival of 'the frenche pockes' (morbus gallicus) in 1493 in Naples, a city then occupied by the French troops of Charles VIII (Frenchmen preferred to call the disease 'the evyll of Naples') and describes the extremely virulent nature of the affliction at that time, its rapid spread across Europe, early methods of treatment (especially with mercury), and the great hope that the discovery of guaiacum wood gave to those infected: "The use of this wodde was brought to us out of the ylond named Spagnola, this ylond is in the weste nyghe to the countrey of Amerike, set in that place where the lenghte of Amerike, stretchynge in to the north, doth ende: and was found of late dayes amonge the newe landes, which were unknowen by the olde tyme" (fol. 8r.). Hutten remarks that syphilis was as endemic on Hispaniola as smallpox and measles were in Europe, posits the sexual origin and transmission of the disease, and describes how guaiacum was to be prepared and administered. In an especially revealing chapter, Hutten discusses the role of physicians in prescribing the drug (the natives of Hispaniola, after all, had no Galenic doctors!), and recalls a remarkable dispute he had with a physician concerning ancient and modern origins of medical authority: The physician doubts guaiacum's efficacy, telling Hutten it is not to be found in Aristotle, to which Hutten responds, "It may be, good father, seinge the disease is newe, and this is a newe medicine, that the hole matter is yet unknowen unto you" (f. 21r.). The conversation recalls the contemporary iconoclastic projects of Andreas Vesalius (e.g., the 1539 'Venesection Letter') a physician who, in his 'China-Root Epistle' of 1546, would soon enter the debate concerning new drugs from new lands intended to treat new diseases. * for full description visit our website at www.martayanlan.com (Inventory #: 5618)
$35,000.00 add to cart Available from Martayan Lan
Share this item
Martayan Lan, Inc.
Offered by