[Complete set of counterproof plates of globe gores and calottes for a 3.5-foot diameter celestial globe]. 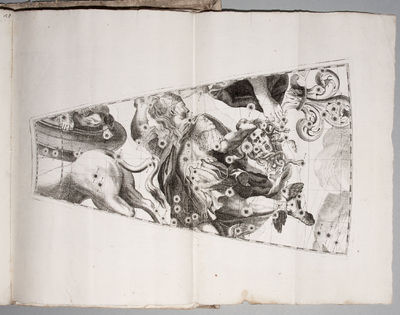 Hardcover
by CORONELLI, Vincenzo Maria
Hardcover. Near Fine. Folio [ca 40 x 25.5 cm, with folded sheets measuring 40 x 51.5 cm]. 48 engraved plates of celestial globe gores, 2 plates of the polar culottes, and 2 further plates of equatorial rings, horizon circles, etc. Bound in contemporary carta rustica, sheets untrimmed, housed in a purpose-made quarter-vellum box. An excellent copy. Exceedingly rare complete set of the counter-proof version of the engraved gores for Coronelli's 3.5-foot celestial globe. This issue is before the addition of the engraved captions and figures; it was intended to show the heavens as they would appear to an observer on earth, as opposed to the conventional celestial globe that represents the stars as seen on an imaginary sphere from the outside. This copy is in exceptional original condition: a set of untrimmed sheets in their original binding, exactly as they would be received by a globe maker. On 7 December 1692 Sr Carlo Malavista, in a lecture on the development of astronomy at the Accademia Fisico-Matematica in Rome, described Coronelli's globes as the most perfect yet produced. He ends his peroration with remarks on the difficulty of using a celestial globe. "Both these globes give to the eye the appearance of being equal, but they are not equally useful to the eyes of the mind, that is, the intelligence, because to express the earth on a globe can be very well done, because the earth is in the shape of a ball on which we walk. The sky on the other hand is the opposite of this. As we stand on the earth the sky is above us, and we observe it as concave and not convex." It was the accepted convention, as Malavista pointed out, to depict the heavens on a celestial globe as they would appear to an observer beyond the heavens. Malavista continued: "To make it easier to understand, the illustrious Giovanni Ciampini, Director of the Academy, has thought fit to have the celestial globe of Coronelli divided into two halves in concave form, so that the stars are seen in their proper location, agreeing with the way we look at them in the sky..." This is the first record in print of Coronelli's concave globes. When Coronelli issued in 1693 a new edition of the celestial globe with fewer names of constellations, he put the proposed innovation into practice by producing the globe in two versions, convex and concave. In Coronelli's account of his travels of 1696-97, Viaggi d'Italia in Inghilterra (1697), a 'Notice to the Public on the globes of Father Coronelli' is appended to vol. II (pp. 204-5). This reports that the celestial globes have been printed, some in convex forms, some in concave form, and that they have been made in this way, not through the mistake of the author, as some so knowledgeable people thought, but for their greater usefulness. The Accademia degli Argonauti made the same point in 1704: "critics construed as a mistake" what was done with the greatest erudition and for the use of our astronomers, namely that our Cosmographer engraved the celestial globe in concave and convex..." A mounted example of the gores for the "concave" globe is recorded in the Bayerisches Nationalmuseum' (Helen Wallis, preface to the facsimile edition of the Libro dei globi Venice 1693 (1701), Amsterdam 1(1969) p. ix. which omits 2 of the plates missing from the BL example reproduced here) This 'concave' version, as distinct from the more standard 'convex version,' was produced by counter-proofing the original plates, not by re-engraving them: A strongly inked impression of the 'convex version' would be made on a sheet of impermeable paper, and then a second impression immediately made from that sheet while the ink was still wet, so that the plate image is reversed. The final two plates in our copy are not part of the Libro dei globi but are added and appear to be pattern plates for globe makers. (Inventory #: 5555)
$125,000.00 add to cart Available from Martayan Lan
Share this item
Martayan Lan, Inc.
Offered by