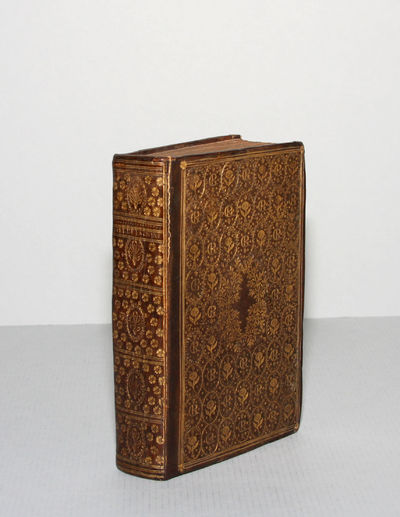 by GONZALEZ DE MENDOZA, Juan
Paris: Jeremie Perier, 1588. Hardcover. Near Fine. 8vo [17.3 x 10.8 cm]. (12) ff., 323 pp., (25) ff., woodcut initials, headpieces, and tailpieces, hand-ruled in red throughout. Bound in contemporary brown morocco richly tooled and gilt with daisies and 'GR' monograms, title gold tooled on spine, all edges gilt. Minor rubbing and edge wear to spine and covers; bookplate of Bernard Hanotiau inside upper cover. Occasional minor marginal staining, clipped corners at ff. 139, 142, 148, 217 and 250, marginal paper flaws to ff. 89 and 291. Overall excellent. $28,500 Rare first French edition - here in a magnificent, contemporary Parisian binding - of the Spanish Augustinian Juan Gonzalez de Mendoza's (1545-1618) groundbreaking treatise on China, a work considered "the most comprehensive and popular book on Ming China to appear in Europe" (Lach, I.ii, p. 330). Though substantially based on Cruz' earlier book on China, it became "One of the outstanding 'best-sellers' of the sixteenth century . It is probably no exaggeration to say that Mendoza's book had been read by the majority of well-educated Europeans at the beginning of the seventeenth-century. Its influence was naturally enormous, and it is not surprising to find that men like [Michel de Montaigne,] Francis Bacon and Sir Walter Raleigh derived their notions of China and the Chinese primarily, if not exclusively, from this work. Even travellers who, like Jan Huighen van Linschoten, had themselves been in Asia, relied mainly on Mendoza's Historia for their accounts of China ." (Boxer, xvii). Mendoza led a mission to China in 1580 on behalf of King Phillip II of Spain. The embassy disembarked at Vera Cruz, Mexico, in the summer of 1581, but, because of political instability in the Philippines, the party sailed no further. Mendoza returned to Spain in 1583 and proceeded to Rome, where Gregory XIII commissioned him to write, in the words of a contemporary reader, "a history of things that are known about the kingdom of China" (Lach, I.ii, p. 473). Originally composed in Spanish, Mendoza's treatise was first published in Rome in 1585, and soon became widely translated and reprinted. The first part of the Historia describes the geographical borders, natural produce, religious beliefs and ceremonies, political structures, education, and maritime activities in China. A section on language contains, according to Brunet, the first published examples of Chinese characters in a western book. The second part covers the approach to China from the Philippines, giving an account of missionary activities (in 1577, 1579 and 1581) on the mainland and the islands. The final section treats the voyage of Martin Ignacio (c. 1550-1606) from Spain to China via the Canary Islands, Santo Domingo, Jamaica, Mexico, the Ladrones and the Philippines. The present French edition also contains extensive information - prominently announced on the book's title page - about Antonio de Espejo's celebrated 1583 expedition to New Mexico, information not contained in all early editions of Gonzalez de Mendoza's work. * Alden & Landis 588/37; Cordier, Sinica 13; Dekesel G69; French Vernacular Books 23231; Löwendahl 26; Palau 105509; Sabin 27780; Lust, Index Sinicus, 23; Western Travellers in China: Discovering the Middle Kingdom, no. 10; G. F. Hudson, Europe and China, p. 242; D. F. Lach, Asia and the Making of Europe; C. R. Boxer, South China in the Sixteenth Century; Pinot, La Chine et la formation de l'esprit philosophique en France; M. Michel, La reliure française. (Inventory #: 5592)
$28,500.00 add to cart Available from Martayan Lan
Share this item
Martayan Lan, Inc.
Offered by