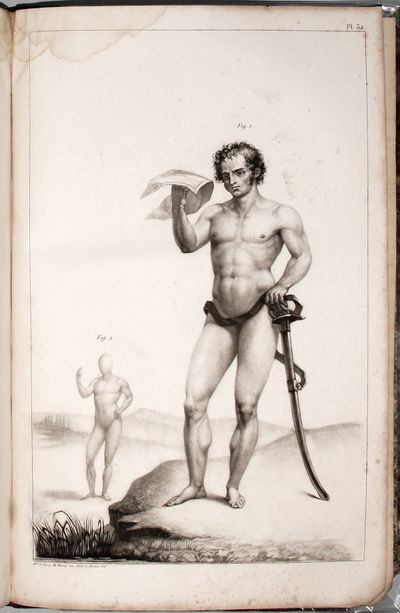 by JARRY DE MANCY, Adèle / LE BRETON, Jean-François
Paris: for the author, 1831. Hardcover. Very Good. Large folio [46 x 29 cm]. (2) ff, iv pp, (5)-63 pp, 59-67 pp, 69-107 pp, (1), plus 32 [i.e. 33, with an '8 bis'] numbered lithographed plates signed Mme. Marchand after Mme. Jarry de Mancy. Quarter bound in contemporary morocco and tree calf over pasteboards, title gold stamped on spine, marbled end papers. Boards rubbed and with edge wear and loss of bottom corners. Moderate spotting throughout, damp staining in upper margin affecting edge of plates, plate 20 with repaired tear. Otherwise good overall. Extremely rare first edition (second issue, a year after the first) of this exposition of the drawing methods of Jean-François Le Breton, a respected drawing master in 19th century Paris. The present work is of special interest, having been wholly composed and lithographed by two women, one of whom was Le Breton's own daughter and pupil and a drawing instructor and painter in her own right. Le Breton (1761-1838) was a provincial artistic prodigy, sponsored by his hometown (Mayenne) to travel to Paris at the age of 20 to study under David and Vincent. His own studio enjoyed much success among students of both sexes. One anecdote relates how even during the Reign of Terror, Le Breton continued to give lessons to the aged Mme. Helvetius while she remained in prison under conditions of strict silence. "Yet the Le Breton method would never have seen the light of day [in print] if it had not been for the close presence of his pupil and daughter. Madame Adele Jarry de Mancy, who edited, under the direction of her father, two works." ("Jean-Francois Le Breton," Réunion des sociétés des beaux-arts des départements a la Sorbonne [1885], p. 435). The present work complements Mme. Jarry de Mancy's earlier Traité de perspective simplifiée linéaire (1828), but gives a fuller introduction to the art of drawing based on chapters covering movement, proportion, shadow, the portraiture of the head and face, etc. The 33 full-page lithographed plates depict diagrams of perspective (and indeed its perception in the human eye) as well as artistic models of faces, buildings, interiors, the use of bistre, ears, hands, and so on. The execution of the lithography, particularly the examples of bistre, is very skilled - but we have been unable to trace the identity of the lithographer, who signs herself only as 'Mme. Marchand'. All plates are also signed by Mme. Jarry de Mancy, delineavit. The societal constraints of the two artists is perhaps apparent in several of the plates: Plate 32, a full-length portrait of a nude soldier, could only be called anatomically correct from the waist up! Adele Jarry de Mancy (1794-1854) was a member of the Athenée des Arts de Paris, "occupant un rang distingué parmi les professeurs de Paris," according to a contemporary review of the present work. The Revue des Deux Mondes (1831, pp. 263-4) indeed gives a good summary of the present work and its utility, as well as noting its publication in 8 livraisons up to the year 1831, perhaps explaining the existence of issues dated both 1830 and 1831. OCLC shows one US copy of the 1830 edition, at the Getty; a further copy of the 1831 reprint is found at the National Gallery. The present work is rare even in European census. * OCLC 852258165; cf. also e.g. the Neues allgemeines Künstler-Lexicon, Vol 6. (Inventory #: 5624)
$2,250.00 add to cart Available from Martayan Lan
Share this item
Martayan Lan, Inc.
Offered by