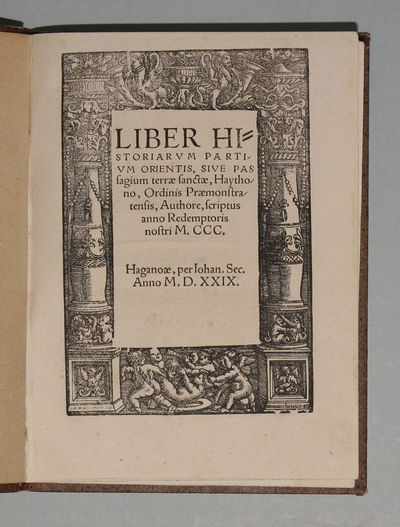 First Latin edition and an internally excellent copy of this account of Asia and the Middle East, which along with Polo, formed one of the few eyewitness sources for Asia from the Middle Ages: According to Lach, in its French redaction (Fleur des histories d'Orient), it formed an important source for Mandeville's knowledge about the Mongols and the great Khan, and even into the 16th century, it was a general source for Grynaeus & Huttich for Eastern matters. (Lach I.l.78, 179). The work is by the Cilician Armenian prince, statesman and general Hetoun of Korikos (d. 1308), and contains a wealth of information on Mongol and pre-Ottoman history, as well as eyewitness records of military campaigns in the Holy Land and Near East during the 13th century.

Hetoun's work was composed in three books: Book I, a geographical survey of fourteen countries in Asia and the Near East; Book II, an account of pre-Ottoman military history in Central Asia; and the much longer Book III, an extremely detailed history of the Mongol Empire, including the rise of Genghis Khan and the Empire's rapid expansion during the 13th century. Book IV proposes a new crusade against the Ottomans, led by an alliance of Armenian and Mongol armies.

As the nephew of Hetoun I, King of Cilician Armenia, Hetoun witnessed and often participated in many of the military, political and diplomatic upheavals described in the present work, such as the Arminian/Mongol victory over Egyptians invading Cilicia (c. 1299). He served as a general in Mongol campaigns, journeyed to the Caucusus, and even claims that he witnessed the inauguration of Mongol Khans. The author also gathered much of his information from his father and uncle, both of whom had traveled throughout the Far East in the mid 13th century. Within Book III (Ch. LXVI), Hetoun categorically states that his Mongol history from the accession of the regent Abaqa Khan (r. 1265–1282) to its conclusion is drawn from his own eyewitness experience.

Though the author is identified on the title page as a Premonstratensian monk—and though he is often referred to in later sources as "Frère" or "Abbé"—Hetoun evidently entered the Cypriot order only briefly, during a short political exile from the kingdom of Cilician Armenia, where he was a member of the royal family. Shortly afterward, he was sent to Rome, and then to Poitiers, where he composed the present work in 1307 by dictating it to his secretary, Nicolaus Falcon.

The popularity of Hetoun's history is attested by the existence of 15 manuscript copies of the original French text of 1307 and over 30 manuscript copies of the Latin, a translation that was undertaken by Falcon that same year. The printed bibliographic record is murky: it is presumed that the present Latin edition postdates an undated French edition printed in Paris and Lyon during the early 16th century. The present edition was printed five more times during the 16th century, and by 1595, the work had also been translated into German, Italian, Spanish and Dutch.