PETRUS PICTAVIENSIS [PETER OF POITIERS], Compendium historiae in genealogia Christi (A Compendium of History in the Genealogy of Christ); in Latin, illuminated scroll on parchment 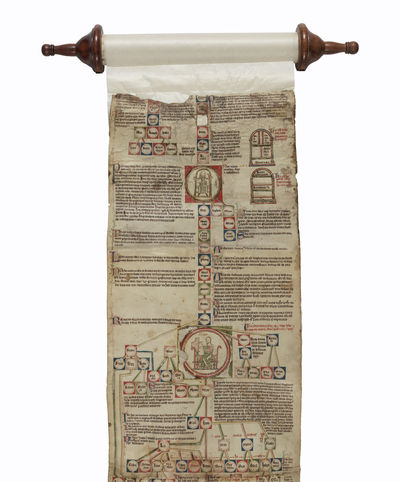 by PETRUS PICTAVIENSIS [PETER OF POITIERS]
THIS IS AN ASTONISHINGLY BEAUTIFUL AND RARE ILLUSTRATED EARLY GOTHIC CHRONICLE SCROLL THAT PROVIDES A SUMMARY OF BIBLICAL HISTORY IN THE FORM OF A GENEALOGY FROM ADAM TO CHRIST. An illuminated scroll on parchment, in Latin, England (perhaps Oxford?), c. 1230-1250. Dimensions c. 3445 x 278-274 mm. The scroll composed of six membranes of varying dimensions, pasted together and joined end to end, with some loss of text at ends. Written in a formal gothic bookhand, layout varies, in one to three columns, designed to be read vertically from top to bottom, FIVE DIAGRAMS of differing shapes, FIVE CIRCULAR MINIATURES, and a unique LARGE RECTANGULAR MINIATURE IN TWO TIERS. The vivid colors of the genealogy contrast with the SIX DELICATE PEN-AND-INK MINIATURES colored with wash. BINDING: Mounted on two modern turned wood rollers, housed in a custom gray cloth box. TEXT: Peter of Poitiers studied at the University of Paris, where he attended the classes of Peter Lombard. served as chancellor of the University of Paris from 1193 to 1205. The Compendium historiae in genealogia Christi is his most famous work. It is a schematic depiction of biblical history in the form of a genealogy of Christ. The text was of fundamental importance for placing biblical narrative in a historical context. Although the text was almost certainly designed to be copied as a scroll, this form is far rarer than in the format of a codex. The present roll may be one of the earliest roll-format manuscript containing Peter of Poitiers's Compendium in this version. ILLUSTRATION: The original version of the scroll includes five diagrams: two cross-section, two aerial view, and one arcade framing a list. The interpolated version of the text marks the start of the Six Ages of the World, the present manuscript has five of these (with Adam missing). The present manuscript also includes a miniature in two registers representing, respectively: three standing kings, two holding a scepter, one a sword; and two standing priests, dressed as thirteenth-century archbishops: each with mitre, pallium, gloves, and crozier. PROVENANCE: The script, minor decoration, and the style of the miniatures, executed in pen and highlighted in wash, support a date in the second quarter of the thirteenth century, probably c. 1230-1250. More recently, it was part of a private American collection. CONDITION: Professionally conserved in 2010 and in fine condition. Full description and photographs available. (Inventory #: 76151)
$450,000.00 add to cart Available from
Les Enluminures, Ltd.
Share this item
Les Enluminures, Ltd.
Offered by

Germany (Freiburg im Breisgau?), dated 1494
(click for more details about Breviary (Dominican Use); in Latin, illuminated manuscript on parchment)
View all from this seller>