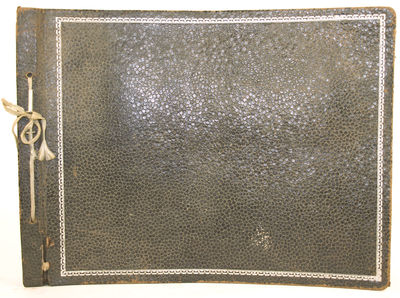 Over 500 tipped black and white and sepia toned photographs. Oblong 4to

Gordon Auchincloss (1886-1943) was born in New York, and was the son of Edgar Stirling and Maria LaGrange Sloan Auchincloss. His grandfather, Samuel Sloan, was president of the Delaware, Lackawanna & Western Railroad, and the Hudson River Railroad, predecessor of the New York Central System. Auchincloss graduated from Groton School in 1904. He received an A.B. degree from Yale University in 1908, and an LL. B. degree from Harvard Law School in 1911. He married Janet House on September 14, 1912.

Auchincloss served as assistant United States attorney for the Southern District, New York and as special assistant to the Attorney General of the United States. He was a member of the law firm of Auchincloss, Alley & Duncan, and served as secretary of the American War Mission to England and France in November, 1917, and as secretary to his father-in-law, Colonel Edward M. House, during negotiations of the Armistice in November, 1918, and during the Paris Peace Conference in 1919. In addition to Chase National Bank, he was a director of International Paper and Power Company, the Crosse & Blackwell Company, societe Financiere de Transports et d'Enterprises Industrielles of Brussels, Belgium; Solvay American Corporation and Compania Hispano Americana de Electicidad of Barcelona, Spain.He was assistant treasurer of the Democratic National Committee in 1916, chairman of the fund raising committee of the New York Association for the Blind, a trustee of the Riverside Church, a member of the State and city bar associations, and Psi Upsilon and Scroll and Key of Yale. Auchincloss died at the age of 56 after a brief illness. (Inventory #: 239010)
$1,500.00 add to cart or Buy Direct from
James Cummins Bookseller
Share this item
James Cummins Bookseller Inc.
Offered by

A Journal of the Voyages and Travels of a Corps of Discovery under the Command of Capt. Lewis and Capt. Clarke [sic] of the Army of the United States, from the Mouth of the River Missouri through the Interior Parts of North America to the Pacific Ocean During the Years 1804, 1805, and 1806

by (Lewis and Clark) Gass, Patrick

Pittsburgh : Printed by Zadok Cramer for for David M'Keehan, Publisher and Proprietor , 1807
(click for more details about A Journal of the Voyages and Travels of a Corps of Discovery under the Command of Capt. Lewis and Capt. Clarke [sic] of the Army of the United States, from the Mouth of the River Missouri through the Interior Parts of North America to the Pacific Ocean During the Years 1804, 1805, and 1806)
View all from this seller>