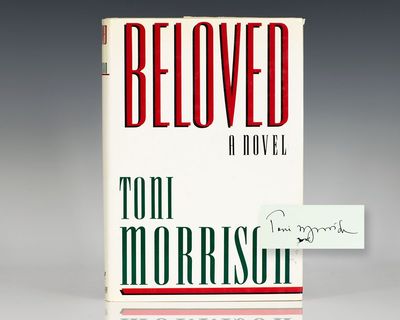 by Morrison, Toni
New York: Alfred A. Knopf, 1987. First edition of the author's fourth novel and considered by many her finest. Octavo, original cloth. Signed by Toni Morrison on the title page. Fine in a fine dust jacket. Jacket design by R.D. Scudellari. Set in post-Civil War Ohio, this Pulitzer Prize-winning novel concerns a runaway slave and her daughter, whose lives are disrupted by a former slave, a spirit and a woman named Beloved. "A masterwork. . . . I cant imagine American literature without it" (John Leonard, Los Angeles Times). It was the basis for the movie Beloved, directed by Jonathan Demme and starring Oprah Winfrey, Danny Glover, and Thandie Newton. (Inventory #: 44087)
$750.00 add to cart or Buy Direct from
Raptis Rare Books
Share this item