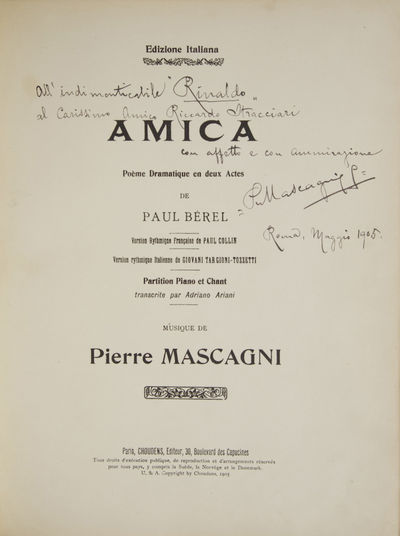 With the composer's autograph inscription signed in black ink to baritone Riccardo Stracciari, who performed the part of Rinaldo in the Italian production of the work, to upper portion of title: "All' indimenticabile 'Rinaldo' al Carissimo Amico Riccardo Stracciari con affetto e con ammirazione P Mascagni" and dated Rome, May 1905.

Together with:
An original role portrait photograph of Stracciari and Biancapelli as Rinaldo and Amica, ca. 203 x 158 mm. Slightly worn; two minor annotations in blue ink and remnants of former mount to verso. Probable First Edition of the first Italian version.

Amica, to a libretto by French publisher Paul de Choudens (Bérel was a pseudonym), was first performed in Monte Carlo at the Théâtre du Casino on March 16, 1905, and was an immediate success. The Italian premiere (with an Italian libretto by Mascagni's close collaborator, Giovanni Targioni-Tozzetti) took place on May 13, 1905, with Riccardo Stracciari (1875-1955) as Rinaldo. Mascagni conducted both performances. It was the composer's only opera with a French libretto.

"Stracciari's mellow, velvety voice, coloured and resonant over its whole range, with an extended and penetrating upper register, made him, between 1905 and 1915, the rival of Titta Ruffo and Pasquale Amato. His repertory included all the great baritone roles and among the dramatic parts he preferred those in Il trovatore, Rigoletto and Aida. But, thanks to a technique characteristic of the best traditions of the 19th century, he excelled in works which allowed him to display his courtly enunciation, smooth singing, elegant phrasing and musical delicacy." Rodolfo Celletti in Grove Music Online.