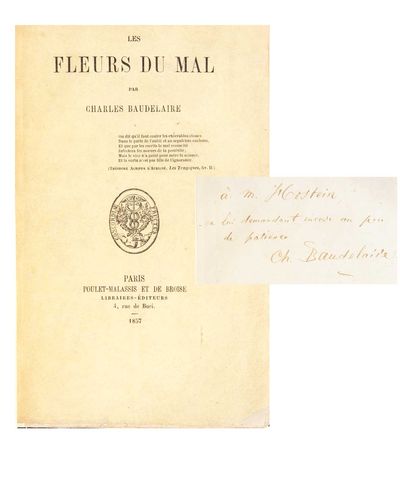 by Baudelaire, Charles
Paris: Poulet-Malassis et de Broise, 1857. First edition. First issue with the running title misprint "Feurs" on p. 31 and 108, p.45 misnumbered 44, and the misprint "captieux" on p. 201. It is complete with the six pièces condamnées whose removal was ordered only six weeks or so after publication (Les Bijoux, Le Léthé, A celle qui est trop gaie, Femmes damnées, Lesbos and Les Métamorphoses du vampire).

Inscribed by the author on the half-title, "à M. Hostein, en lui demandant encore un peu de patience, Ch. Baudelaire." Ink a bit faded. Hippolyte Hostein was a writer and the director of the Théâtre de la Gaîté in Paris from 1849 to 1858. Baudelaire had proposed a play to Hostein, a melodrama based on his poem Le Vin de l'assassin, where a worker kills his wife so that he can descend into drink without interruption or criticism. The part of the wife was meant for Marie Daubrun, an actress at the Gaîté with whom Baudelaire had fallen in love. Baudelaire never wrote the play, and perhaps he sent this book as an apology for still not producing his text (see F.W.J. Hemmings, Baudelaire the Damned, 2011).

12mo (189 x 122mm.), half-title, later crushed brown morocco by L. Peeters of Antwerp, top edge gilt, others uncut, original yellow printed wrappers in their second state (with the five typographical faults uncorrected and with the price of 3F. on the backstrip) bound in, marbled paper slipcase, small area of loss to lower corner of upper wrapper. This copy has bound at the end two facsimiles of the lower wrapper, in state A and state B, together with a printed note regarding Vicaire's research into the two states (now superseded by Carteret's bibliography).

A Booke of Presidents Exactly Written in Maner of a Register, Newly Corrected with Addicions of Diuers Necessary Presidents..

London : Richard Tottelli , 1572
(click for more details about A Booke of Presidents Exactly Written in Maner of a Register, Newly Corrected with Addicions of Diuers Necessary Presidents..)

New York : Random House , 1957
(click for more details about Atlas Shrugged)
View all from this seller>