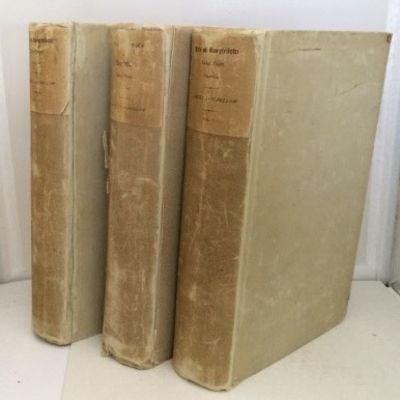 by Longfellow, Samuel (edited by)
Boston, MA: Ticknor and Company. Very Good. 1886. 1st Edition; 1st Printing. Hardcover. B&W Illustrations; SIGNED EDITION. This is the Large Paper Edition, limited to 300 copies, twenty-five of which are reserved for England. This copy is #5 - for America. Three Volume Set. This set includes, tippedth-in three handwritten and signed letters by Samuel Longfellow to the publisher (Ticknor) regarding possible changes to be made for either an updated edition or a new edition of the book. It is likely that this set was the property of the publisher as a working copy. The set is in overall Very Good+ condition and was likely issued without dust jackets. The covers of the books have some edge wear and rubbing along with some ground-in dirt. Volume two has had the front spine joint professionally repaired where it had cracked. The text pages are clean and bright. The foredge and bottom edges of the book are untrimmed. The front inner hinge of Vol. One is cracked. The inner hinge of vol. Two has been repaired. Two of the letters have been tipped-in and one letter and a lithograph portrait of H. W. Longfellow have been laid-in. This is a unique copy which shows the true effort put into the detail (almost to the point of nitpicking) of a book so lovingly compiled. Samuel Longfellow was the younger brother of H. W. Longfellow and a clergyman and hymn writer in his own right. "Samuel Longfellow was born June 18, 1819, in Portland, Maine, the last of eight children of Stephen and Zilpah (Wadsworth) Longfellow. His older brother was the poet Henry Wadsworth Longfellow. He attended Harvard College and graduated in 1839 ranked eighth in a class of 61. He went on to study at Harvard Divinity School, where his classmates included Thomas Wentworth Higginson and Samuel Johnson, with whom he would later collaborate in his hymn writing. He is considered part of the second-generation of transcendentalists; after becoming a Unitarian pastor, he adapted the transcendental philosophy he had encountered in divinity school into his hymns and sermons. Longfellow served as a pastor in Fall River, Massachusetts (1848) , Brooklyn's Second Unitarian Church (1853) , and Germantown, Pennsylvania (1878-1882). After his older brother's death, Longfellow published a two-volume biography of him in 1886. He wrote the book while living at his brother's former home, Craigie House in Cambridge, Massachusetts." ; Signed by Editor . (Inventory #: A34554)
$1,000.00 add to cart Available from S. Howlett-West
Share this item
S. Howlett-West Books
Offered by

$5.00 for Media mail shipping for first book & $1.50 for each succeeding title.(please note that packages shipped this method can take up to four weeks to arrive) or Priority rate shipping or Fed Ex for $7.00 for the first book & $2.50 for each additional title. All books mailed with care and in most cases will include automatic delivery confirmation for tracking ability. International customers charged at cost. We offer a 20% dealer discount. Please let us know if order is for resale. Gladly accepting checks, money orders and VISA, MASTERCARD, DISCOVER, AMERICAN EXPRESS and Pay Pal . Two week returns for any reason with prior notification. Email preferred, or leave message on answering machine. We check messages at least twice a day. Come visit out New website at : showlettwestbooks.com. Always buying individual titles or collections. Please contact us for details.
More from this seller

London, England : Voyager / Harper Collins , 1998
(click for more details about A Clash Of Kings Book Two of a Song of Ice and Fire)