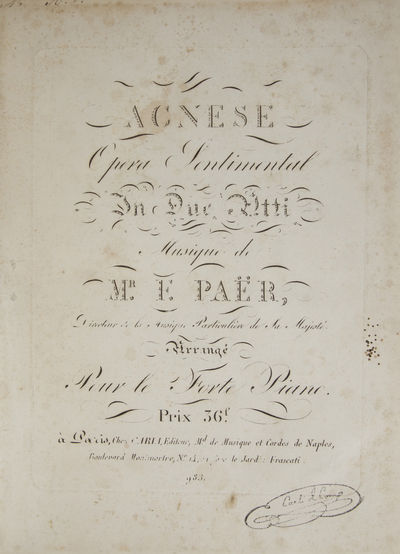 Binding slightly worn, rubbed, and bumped; partially split at joints. Slightly foxed, heavier to some leaves; upper margins trimmed, including signature to title. Lesure I, p. 46. OCLC no. 24683585. Not in Eitner, BUC, Hirsch, or Hoboken.

Agnese, to a libretto by Luigi Buonavoglia after Filippo Casari, was first performed at the Villa Scotti, Teatro Ponte d'Attaro in Parma in October 1809.

"Agnese is Paer's last opera semiseria and the one in which comic and serious elements are most skilfully integrated. Its situations have been perceived as anticipating those of such intense psychological melodrammi as Donizetti's Lucia di Lammermoor and Verdi's I masnadieri which became common after 1830; other authorities have noted a similarity in Donizetti's Il furioso all'isola di San Domingo, as both there and in Agnese the mad scene involves the participation of a 'buffo' - clearly a throwback to the 18th century when male dementia was regarded as entertaining rather than tragic." Scott L. Balthazar in Grove Music Online. (Inventory #: 25860)
$468.00 add to cart or Buy Direct from
J. & J. Lubrano Music Antiquarians
Share this item