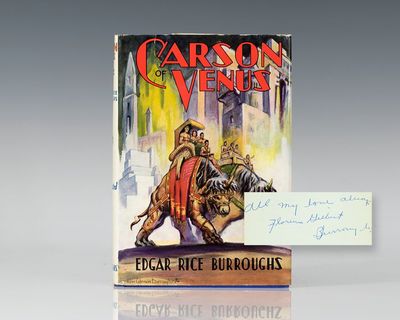 by Burroughs, Edgar Rice
Tarzana, CA: Edgar Rice Burroughs, Inc., Publishers, 1939. First edition. Octavo, original blue cloth, illustrated endpapers, illustrated by John Coleman Burroughs. Warmly inscribed by Florence Gilbert Burroughs on the dedication page, "For Eddie all my love always Florence Gilbert Burroughs." Florence Gilbert Burroughs was the dedicatee of this novel and wife of Edgar Rice Burroughs. Also inscribed by Danton Burroughs on the half title page, "To Eddie a truly great man- you've known generations of my family and even dated my mother- Warmest Personal Regards, Danton Burroughs 4-7-90." Danton Burroughs is the son of John Coleman Burroughs. Also, inscribed by John F. McGuigan, "Dear Eddie, You are a man whose friendship I will always cherish. My very best John F. McGuigan April 7, 1990 L.A." McGuigan is the author and editor of several books on Tarzan. Fine in a near fine first state (laminate) dust jacket with light rubbing. Carson of Venus is the third book in the Venus series (Sometimes called the "Carson Napier of Venus series") by Edgar Rice Burroughs. It was serialized in Argosy in 1938 and published in book form a year later. The novel, which was written close to the outbreak of World War II, satirizes Nazi Germany by including a fascist political faction called the "Zani." "The third and by far the finest book in the series [of Venus novels" (Survey of Science Fiction Literature I, pp. 298-302) (Inventory #: 47061)
$800.00 add to cart or Buy Direct from
Raptis Rare Books
Share this item