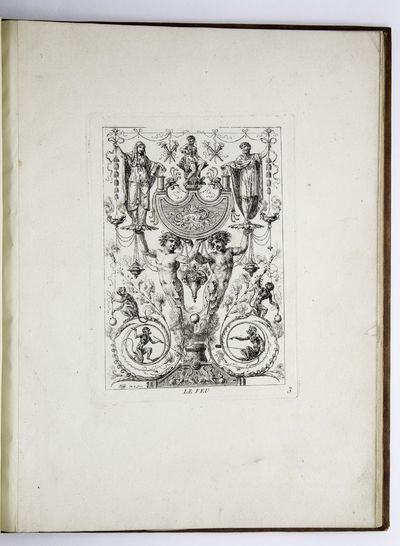 by DUGOURC, Jean Démosthéne (1749-1825)
Paris: Jacques-François Chereau, 1782. From the Collection of Arthur & Charlotte Vershbow. The complete set of six etchings including title, plates 155 x 115 mm, sheets 275 x 200 mm, good impressions, small marginal repair to each plate, pale dampstain to final two plates, generally in good condition, each sheet mounted on guards. 20th-century mottled calf. Joints rubbed. Provenance: William Odom (bookplate); purchased from William Schab, 1984. A charming series of ornament prints representing Air, Fire, Water, Earth, Venus and Mars. Jean Démosthéne Dugourc was a French painter and engraver employed by the Duke of Orléans, the brother of the king. In 1783 he designed costumes and scenery for the opera, and later founded factories for producing wallpaper and playing-cards after his own designs. Berlin Kat. 492; Guilmard, p. 280, no. 95. (Inventory #: 401737)
$1,000.00 add to cart or Buy Direct from Riverrun Books
Share this item

All items are guaranteed as described and are returnable within 30 days. Please e-mail orders@riverrunbooks.com or call (914) 478-1339 to initiate your return. In your e-mail, please include your name, item(s), and reason for return. Overseas orders should specify shipping preference.All postage is extra.New clients are requested to send remittance with your orders. Libraries may apply for deferred billing.All New York residents must add appropriate sales tax.We accept PayPal, American Express, Master Card and Visa.All items are subject to prior sale; prices are subject to change.
More from this seller

Scalo , 1994
(click for more details about Farewell to Bosnia)

Assouline , 2012
(click for more details about Windows at Bergdorf Goodman. Special Edition)
View all from this seller>