THE ANALOGY OF RELIGION, NATURAL AND REVEALED, TO THE CONSTITUTION AND COURSE OF NATURE.... Millard Fillmore's Copy Signed by Him 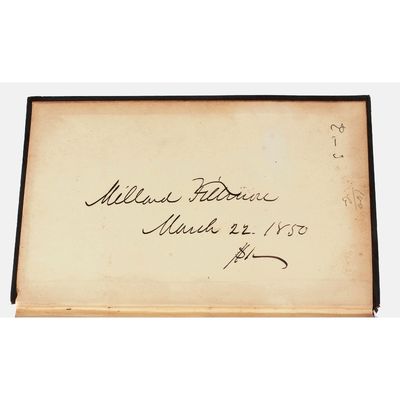 by [FILLMORE, Millard] BUTLER, Joseph and WILSON, Daniel
New York: Robert Carter, 1848. First Edition. Hardcover. Moderate foxing, some rubbing and staining to the front cover. Very Good. Octavo (5-3/4" x 9") bound in publisher's brown blind-stamped cloth, gilt lettering on the spine; 312, [8] pages. SIGNED and dated 22 March 1850 with a price of $1 vertically on the front pastedown by the thirteenth President of the United States while in office. Fillmore has also written the notation F - 1 on the top of the title page, a notation he used on books in his personal library to denote the room and shelf where the book was stored. An especially large and attractive signature.

Millard Fillmore was an avid reader and book collector. Fillmore established the first White House Library. When he moved from Washington, he relocated his library to Buffalo, NY. After his death in 1874, his large library was sold by his son. (Inventory #: 018447)
$1,250.00 add to cart or Buy Direct from Charles Agvent
Share this item

THE FALL OF THE CITY. A Verse Play for Radio

New York & Toronto : Farrar & Rinehart, Inc. , (1937)
(click for more details about THE FALL OF THE CITY. A Verse Play for Radio)
View all from this seller>