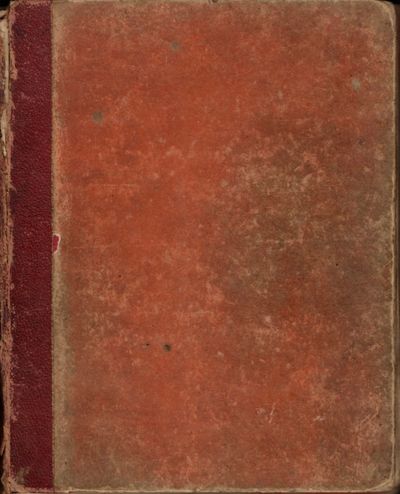 by [William H. Given]
Maine & Wisconsin: J. C. Riker (Publisher of the Album), 1863. Album. Fair. 8vo. (approx. 8" x 6"). [96] pages multi colored paper. Illustrated with 6 small color illustrations of birds and fruits at the top of the pages and a steel engraved title page from the publisher J. C. Riker. Orange paper covered boards with red leather spine. "Album" in gilt letters and gilt decorations on the spine. The front and rear boards are detached. A few pages are loose. 45 pages were used for inscriptions, verse, autographs, etc. Several of the entries are faint and difficult to read. The first entries began in Bowdoinham, Maine 1858. In 1859 the Memory Album moved from Maine to Hortonville, Wisconsin where some of the entries were recorded. Several Album entries appeared from Oshkosh, Wisconsin in 1860. Many of the inscriptions wished "William" well on his departure from Wisconsin. Two inscriptions in the Album, dated in 1862 and 1863, are signed from Bath, Maine. The full name of William H. Givens was found on a page that included a nice calligraphy example. A cousin of William signed their last name as Givens on one of the inscriptions. (Inventory #: 11356)
$150.00 add to cart or Buy Direct from Americana Books
Share this item

Personal Memoirs of U. S. Grant. Volume I only

New York : Charles L. Webster & Company , 1885
(click for more details about Personal Memoirs of U. S. Grant. Volume I only)
View all from this seller>