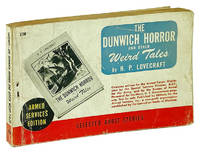 The Dunwich Horror and Other Weird Tales

New York : Editions of the Armed Services , 1944
offered by Between the Covers Rare Books 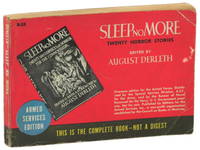 NY : Editions For the Armed Services , 1945
offered by Kenneth Mallory 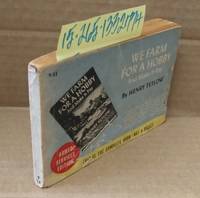 We Farm for a Hobby

Armed Services Editions, small-format paperback books distributed to US servicemen during WWII, are credited with achieving a great deal: not just with improving morale among the troops, but also with revolutionizing the post-war publishing industry, making certain books into classics, and expanding the American middle class. The book When Books Went to War: The Stories That Helped Us Win WWII, by Molly Guptill Manning, reveals the largely forgotten story of the Armed Services Editions.

When the US entered the war after Pearl Harbor, librarians initially got behind a nationwide book drive, the Victory Book Campaign, which aimed to collect 10 million donated books and supply them to the troops. Although this campaign was eventually successful, it took time, and many of the donated books were too old or heavy to be of use. A group of publishers came together to form the Council on Books in Wartime, and resolved to produce a series of lightweight, durable books which reprinted popular novels and classics that would be of interest to the soldiers, sailors, and airmen serving their country.

The format was innovative: paperback, stapled (later glued) on the short side, and printed in small type across two columns to fit more words on a page and make reading under battlefield conditions easier. The covers were thumbnails of the original hardcover jacket image, and carried lists of the other ASE titles released that month. The books were initially printed in two sizes, both designed to fit into soldier's pockets.

This ASE of Constance Rourke's Davy Crockett shows the center stapling along the short edge and the two-column printing.

Although some were initially skeptical as to the durability of paperback books -- hardcovers being very much the norm pre-war -- the ASEs were gratefully passed from soldier to soldier, and were so treasured that servicemen felt "that to heave one in the garbage can is tantamount to striking your grandmother." The format was a huge success, both financially and practically, and one that publishers on both sides of the Atlantic adopted after the war in face of continued paper rationing.

The troops loved the ASEs, and one sailor reported that a man was considered "out of uniform if one isn't sticking out of the hip pocket." Books provided access to emotions in short supply while at war: humor, love, compassion, hope, tenderness. Novels like Betty Smith’s A Tree Grows in Brooklyn and Rosemary Taylor's Chicken Every Sunday allowed men to imagine they were at home for a brief time; others like Lilian Smith's Strange Fruit and Kathleen Winsor's Forever Amber provided an erotic charge; while many others sought to educate about foreign policy, the reasons for war, or the countries the troops were fighting to liberate. (One incredulous marine began reading Herman Melville's Typee out of boredom, and was delighted to discover "that guy wrote about three islands I'd been on!"). As the war drew to a close, instructional books about retraining for post-war industry, going to college, and re-entering civilian life entered the mix.

The covers of ASEs showed a thumbnail image of the hardcover.

Authors received hundreds of letters from troops during the war -- and beyond -- reporting how thankful they were to read certain things, and how the books had affected them. Wallace Stegner even ended up with many returning GIs in his classes at Stanford because they'd read The Big Rock Candy Mountain as an ASE. For many men who hadn't read a book since high school, the impact of their monthly book allowance was life-changing. The ASEs formed a life-long habit of reading for many, and changed their perspective on education. Reading a book ceased to seem like a difficult or dull task, and when the GI Bill made a college education available for many, a generation of men were ready to take advantage -- growing the middle class, and making the post-war consumer boom possible.

Do You Collect Armed Services Editions?

ABAA-member James Dourgarian has compiled a searchable index of ASEs on his website...

Manning's book is fascinating because it goes well beyond the story of how the ASEs came to be and how various production and distribution problems were solved. The author paints the larger political scene in Washington and provides a great sense of how the larger debates surrounding the war impacted on the ASE program, and vice versa. The books briefly became a political hot potato as Senator Robert A. Taft attempted to stop servicemen voting in the 1944 Presidential election (it was thought they'd vote overwhelmingly for Roosevelt -- as they likely ultimately did) by censoring the books that were part of the ASE program. The Council on Books in Wartime deftly mobilized editorial writers nationwide, who rounded on Congress, comparing the proposed censorship to Nazi book burnings and decrying America's use of such tactics. The idea of censoring the books sent to the troops overseas was political dynamite, as by this time most families knew the value of the ASEs for morale and mental health only too well. When Taft was overheard by journalists admitting that it was an attempt to stop soldiers voting for Roosevelt, he was disgraced and the law was rapidly re-written.

ASEs provided an escape from even the harshest conditions.

It's also instructive to learn how the GI Bill evolved in light of the educational value of the ASEs, and how British publishers adopted the design of the popular paperbacks to revitalize their industry after six years of war.

Looking through the lists of ASEs published, it is fascinating to see which novels have subsequently sunk into obscurity, and which were catapulted into canonical status through being so widely read. F. Scott Fitzgerald's The Great Gatsby was an ASE, and its post-war rise to Great-American-Novel status is partially credited to this. A Tree Grows in Brooklyn similarly remains an American classic, while once-popular books like Chicken Every Sunday and Strange Fruit, and authors like Katherine Anne Porter and war correspondent Ernie Pyle are relatively unknown outside of academic and book-collecting circles.

Although published in the U. S., this is the first edition of Bombs Away in French, the Overseas Editions series was a cousin to the Armed Services Editions issued to soldiers during and shortly after World War II, it includes Steinbeck's previously unpublished preface (in also in French) written especially for this book. (Offered by James M. Dourgarian, Bookman)

As collectible items, ASEs are not particularly hard-to-find, although some titles are more elusive than others.  While the books themselves may not be as collectible as first editions or signed copies, the story of the Armed Services Editions is remarkable, and knowing what the individual volumes are likely to have gone through, ASEs of your favorite novels or authors will enrich any collection.

Plus, while younger generations may roll their eyes at your leather-bound incunables printed in a foreign language, they are often intrigued by these colorful books that were part of the largest war our planet has ever known -- a vital part of the war according to Manning -- and offer a doorway into, if not a life of collecting, then at least an understanding of your fascination with rare books.

The slogan of the Council for Books in Wartime was "Books are Weapons in the War of Ideas."

Anyone wanting to know more about collecting ASEs should refer to ABAA-member James Dourgarian's article on Armed Services Editions, which originally appeared in Firsts Magazine in 2001. Dourgarian specializes in ASEs (among other things) and was one of the experts Manning turned to while writing her book. Dourgarian's website contains a very useful index of all ASEs by both author and issue number.

When Books Went to War by Molly Guptill Manning is published by Houghton Mifflin Harcourt.

New York: Armed Services, Inc, 1944. First Edition. Wraps. Very Good. E. B. White's third book, and one co-authored with James Thurber who also provided the illustrations. First published in 1929, this edition was reprinted on numerous occasions. This unabridged edition was published by the Armed Services in 1944 with the number identifier M-2 [Hall A3]. Armed Services, Inc. reprinted it again in 1946 but with the number identifier #1016. From the Estate of Joel (1930-1997) & Allene White. Second Printing, 1946. 128 pp. 32mo. Light wear and scuffing to covers, sunning to spine. Armed Services Edition #1016.

THE LADY IN THE LAKE

The Case of the Black-Eyed Blonde

After sixty-two years in the field of historical letters and manuscripts, Kenneth W. Rendell still feels just as excited as he was when, many years ago, a friend showed him a handwritten letter of Geo... [more about Kenneth Rendell Endows Two Lecture Series]

Our members list new acquisitions and recently cataloged items almost every day of the year. Below, you'll find a few highlights from these recent additions... George Washington's Second Thanksgiving ... [more about Weekly Highlights]